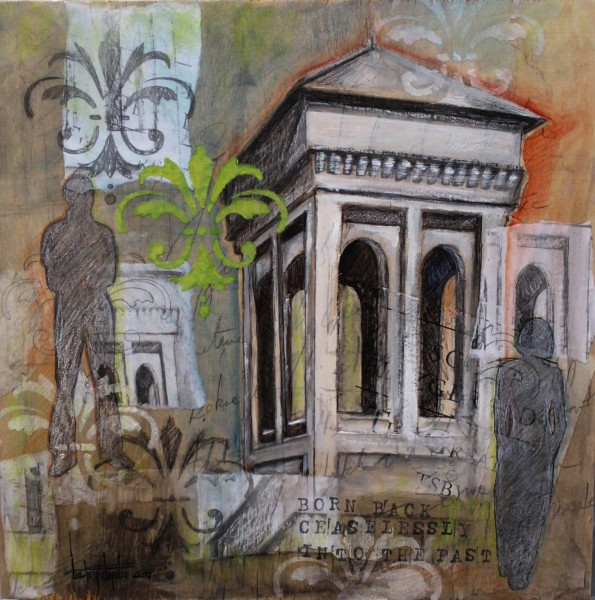 My latest painting: “Borne back ceaselessly into the past,” a Xmas gift for a college friend. A local waterworks tower and The Great Gatsby held great significance for us.

“Gatsby believed in the green light, the orgastic future that year by year recedes before us. It eluded us then, but that’s no matter — tomorrow we will run faster, stretch out our arms farther. . . . And one fine morning ——

So we beat on, boats against the current, borne back ceaselessly into the past.”

Did anyone catch that visual reference to the green light of the future? 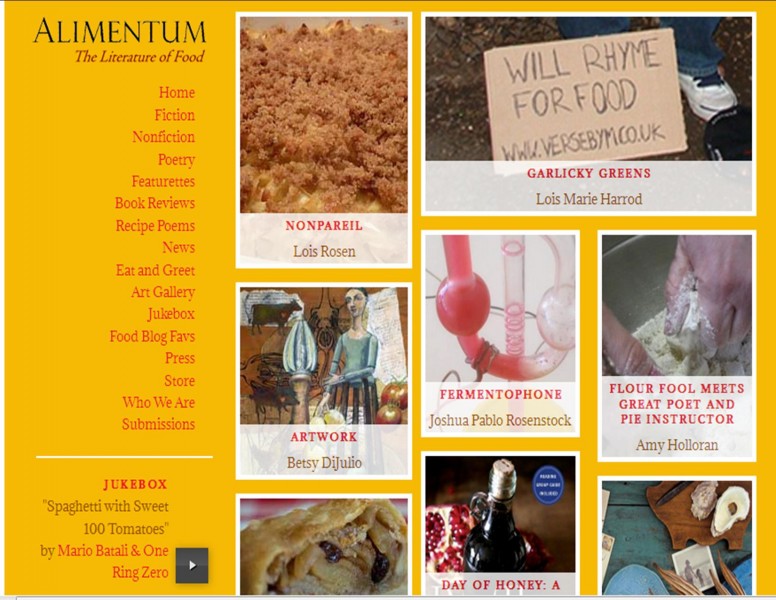 Back in the summer, my friend Katherine Huntoon, introduced me to Alimentum, a literary and art journal devoted to food.

I investigated a bit, got up my courage to make a pitch, and sent off requisite materials.  Quite a long time passed–publishing the journal is a labor of love–but when I heard back, the news was thrilling: the editors planned to feature two of my mixed-media pieces in the December issue and they want to feature my “Natural Intelligence (Fungus)” series in a future issue!

Had I known at the time how pedigreed and accomplished their editorial staff of 8 is, I might have been too intimidated to contact them.  Fortunately, I only read their bios after my work had been accepted and published in this month’s issue!   However, my contact, Eric LeMay, was beyond warm and gracious with his feedback from the team.

I would love for you to follow the link above to the journal’s home page where you can click on the featured artwork icon to go directly to the “gallery” of my work, which is accompanied by an artist’s statement and bio.

The journal describes itself thusly:

Since 2005 Alimentum has been delighting readers with stories, essays, and poems that use food as a kind of muse to inspire memory, ideas, humor, joy, melancholy, triumph and reflection. The works are not just about what’s on your plate. They explore our deep personal connection to how we eat, what we eat, and the very primal part food plays in our lives.

Alimentum has participated in several AWP conferences and many other conferences and book fairs including the Southern Festival of Books, the Brooklyn Book Festival, NY Small Press Book Fair and has hosted numerous public readings and forums. We’re a member of CLMP and have received kudos from the New York Times, Huffington Post, Chicago Tribune, NY Daily News, Connecticut News Times, Poets & Writers, BBC Radio, Weekend America, and other media. Our writers’ essays have appeared in Best American Essays and Best Food Writing. We’ve received 1st Place Awards from the Bookbinders Guild New York Book Design Show two years in a row, and were honored as Best Food Magazine in the World from the International Gourmand Awards. 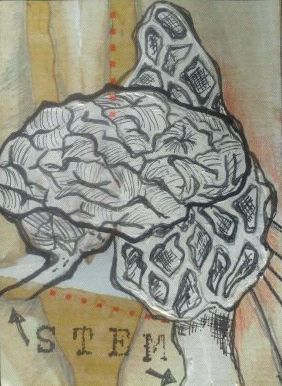 This tiny mixed-media painting, “Stem,” along with two others–“Foot” and “Respiration”–was juried into the “Small Works” exhibition at the Charles H. Taylor Art Center in Hampton, VA, which opened yesterday.  All three pieces sold on opening day AND “Stem” was presented with an Award of Merit!

I have to confess, though, that these piece are less about food and veganism than about Natural Intelligence.  The series of 12 “artist trading card” size mixed-media pieces was my response to an assignment by the inimitable and irrepressible, Joanne Winkler, the professor of a graduate course that I was fortunate to take this past summer at Goucher College in Towson, MD.  On the long drive up, I heard a fascinating interview on NPR with Paul Stamets, a well-known mycologist.  So, when were were assigned a “Concentration” of twelve 2.5 x 3.5-inch pieces all related to one theme by the end of that week, I knew instantly what mine would be.

What great food for thought! 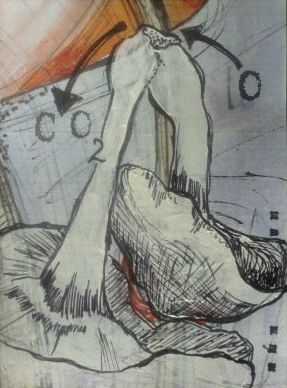 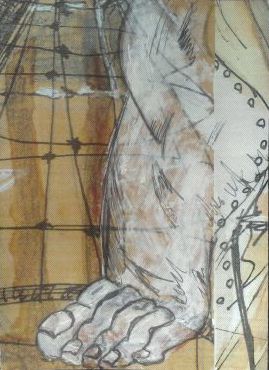 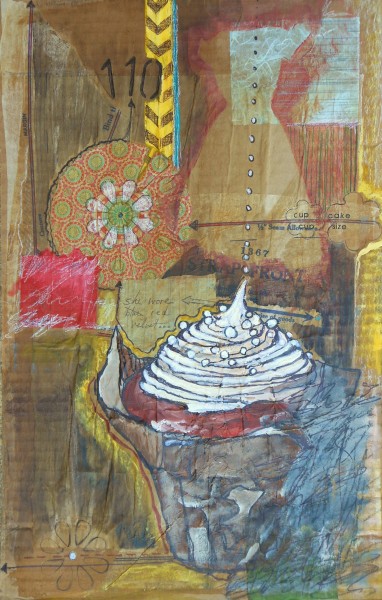 As promised, here is my teacher sample for the cupcake challenge I presented to my wonderful Advanced and AP Art students last week.

I am reasonably happy with mine–after lots of working back into it–but I can’t WAIT to show you theirs!  On Thursday, they made drawings from vegan cupcakes, both Whole Foods’ (dry cake and grainy frosty) and my homemade Red Velvet ones (the fan favorite!).

Tomorrow, they start their compositions in earnest.  Stay tuned!