Corn Pudding Baked in an Orange Bell Pepper at 350 for 25 minutes.  I topped mine with leftover Whipped Cauliflower with Lemon Zest, Cranberry Sauce, and Roasted and Lightly Salted Pepitas.  Such a cozy quick meal after a packed day on a chilly night. 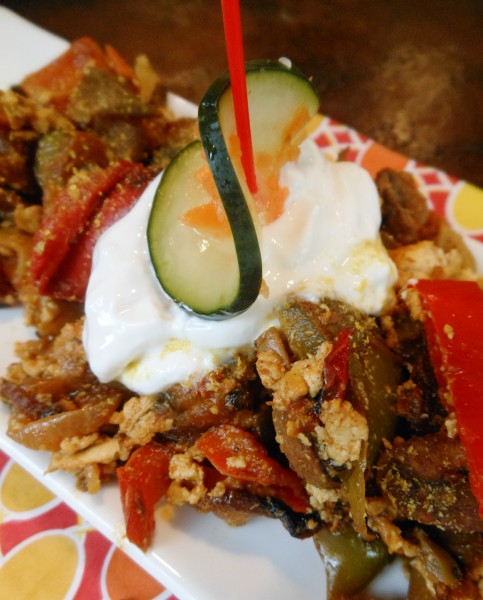 Joe and I go out for Mexican food at least once a week–alternating between two neighborhood restaurants– and, last night, we both ordered something different than we normally do.  He, an omnivore, ordered chilaquiles and I ordered what I didn’t realize was vegan fajitas, as it was called something like “Vegetarian E,” with a side of refried beans.  Had I realized, I would have known it would be way too much food, though I never mind tasty leftovers.

I topped my beans with a few of the griddled veggies–onions, red and green peppers, and mushrooms–including some of those nice deeply caramelized bits, and enjoyed them with a side of tortilla chips (too many!) and fresh, zesty pico de gallo.  I felt completely sated, yet there was a heaping mound of the vegetables still left and three tortillas rolled up in foil.  So, we packed it all up and brought it home.

Having considered lots of options for those vegetables–some I hope to try in the future–I ultimately decided on my own version of chilaquiles for lunch today.  I sliced the tortillas, pan sauteed them in a little oil, crumbled in some tofu and spices which I sauteed until the tofu began to turn the barest hint of golden brown, added the veggies with a little salsa and nutritional yeast, and sauteed the whole mixture until heated through.

I hope you find this quick Mexican melange as addicting as I did topped with a dollop of vegan sour cream and a slice of marinated cucumber.

7 ounces extra-firm tofu, drained and pressed gently with paper towel (half of a 14 ounce box)

Heat oil in a large cast iron skillet over medium-high.  Add tortillas and a pinch of salt and saute, stirring constantly, until beginning to turn crisp. Crumble in tofu, sprinkle with cumin and smoked paprika, and saute, stirring, for a couple of minutes or until tofu becomes a little drier and begins to turn a light golden brown.  Scrape up any bits of tortilla or tofu that begins to stick on the bottom of the skillet and turn brown, as they add great flavor.  Add the vegetables, salsa, and nutritional yeast, and continue sauteing, stirring, and scraping, until heated through, only a couple more minutes.  Serve immediately garnished as desired. 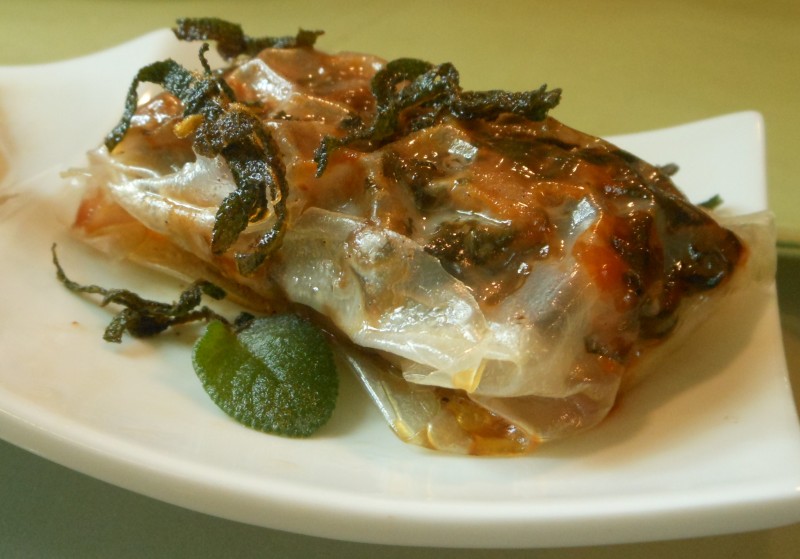 Baked, rather than steamed OR fried–and seasoned with sage and anise–who knew what a lovely marriage that is?–these simple and sensational spring rolls are like little gifts to your palate!

Find my recipe at One Green Planet.

BTW, they are quick too, as they bake a mere 4 minutes for a texture transformation!

Following the Super Bowl, if you have any leftovers of my Vegan Fat-Free Spinach-Three Bean Dip and my Vegan Queso con Carne Dip, here’s a really tasty and satisfying meal you can whip together in a flash. Note that while they look more like burritos, since they are “sauced,” I’m calling them enchiladas but I hope you’ll call them “dinner”:

Preheat oven to 350 degrees and oil a baking dish. Spoon abut 1/4-1/3 cup of the Spinach-Bean Dip into an elongated mound in the center of a tortilla (I used spinach wraps), fold one side over, fold in the ends and roll up, placing seam side down in the baking dish. Continue until you’ve used up the dip or made the amount of enchiladas you need. Then smother them with the Queso con Carne Dip, making sure to cover the enchiladas completely. Bake for 20-30 minutes or until hot and slightly “set.” Serve with vegan sour cream and, if desired, fresh cilantro.

Calzones are the perfect little pouches for turning leftovers into a whole new meal. And with the dough such a breeze to make, there’s no reason not to add these savory and portable meals-in-one to your weekly repertoire.

For the calzone in the photo, I mixed some leftover Spaghetti Squash with Caramelized Onions, Greens and Dried Cranberries with a little of my Vegan Swiss “Cheese” and my vegan Veggie Marinara Sauce, tucked it into my go-to pizza dough, and brushed the surface with woodsy Rosemary Olive Oil before baking it to a golden brown.

I happened to have all of those ingredients on hand, and that’s the point: you don’t need to make anything special to stuff in a calzone. Just get creative with what you have so that these little packages don’t become big burdens.

However, if you want to make my version, just click on the links below to go to the recipes. Once there, you may need to scroll down to find the specific recipe or part of a recipe you’re looking for, e.g. Veggie Marinara Sauce in a stuffed shells recipe.

My recommendation, though, is to just use my method (below) to make your fabulous creation.

Preheat oven to 450 degrees. Place pizza stone inside to heat for 30 minutes. Meanwhile, combine squash mixture with vegan “cheese” and marinara sauce to make a thick filling that holds together well. Add more vegan “cheese” or sauce as needed. Taste and add salt if desired.

Tear off a piece of foil about six inches wide, shiny side down. Spray lightly with non-stick spray. With fingers lightly dusted with flour, shape dough into a ball and place in the center of the foil. Beginning in the center and working your way to the edges, use your fingertips to gently press the dough into a circle approximately 1/4-inch thick. (If the dough is too thin, it will tear; if too thick it will unappealingly heavy.) Spread dough with a thin layer of “cheese,” leaving a generous 1/4 inch border. Mound up the filling on top of the vegan “cheese” on one half of the circle, again leaving a generous 1/4-inch margin. Fold plain half of dough over filling and press edges together to seal. Crimp with a fork and prick top a few times. Brush with Rosemary Olive Oil.

Carefully remove hot stone from oven. Slide calzone onto the stone, foil and all, and bake for 11-15 minutes or until golden brown. When calzone develops a little bit of color, brush top again with oil, sprinkle with salt if desired and finish baking. Remove from oven and let cool on a wire rack for at least 10-15 minutes. Slice calzone in half and serve one half per person. Serve warm with heated marinara sauce for dipping if desired.

Reheat any leftovers on a seasoned pizza stone in a preheated 350 degree oven for 8-10 minutes.