A delicious deck dinner with our dear friend and Aint B to our dogs, Bonnie Mattiko, signals the cusp of summer:

I sometimes like a slaw-salad mix that is part shredded cabbage/carrot and part mixed baby greens. The dressing was mayo, artisanal habenero pickle juice (though any sweet or dill juice would be tasty), and hot chili crisp to taste. I purchase the crisp in the Asian foods aisle at Kroger. It is piquant, but not too spicy.

If anyone cares about such things, I found a no- cal mayo that allows me all the delicious dressing I want. Called Walton Farms, I purchase it at Harris Teeter and, while I don’t care for it on its own, I really like it jazzed up with assertive flavors such as this. 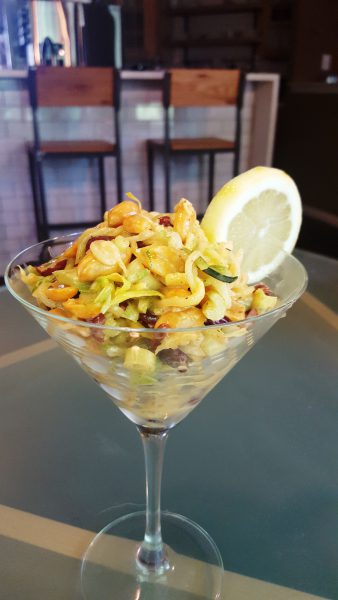 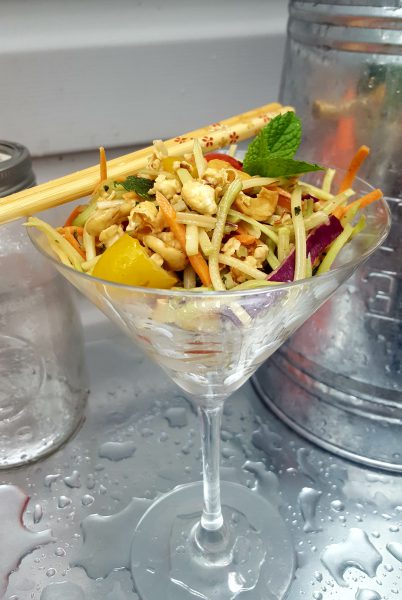 My brand new vegan slaw is “flexy” because you can use your favorite vegetables and mix it up differently every time; and “sexy” because it is so light and healthy that it looks good on everyone.  Plus, you’ll have to admit, the martini glass presentation is James Bond meets West Elm sexy.

Simply keep the proportions as provided and then have your way with this slaw which is perfect for a light lunch.  Serve it however you choose, but a clear stemmed glass and chopsticks make it so pretty and fun to nibble.

Juice of 1/2 medium lime or lemon

In a small bowl, whisk together first 6 ingredients to make dressing.  In a medium-large bowl, gently toss together remaining ingredients except garnish.  Drizzle dressing over, toss again, Divide into serving dishes and garnish as desired.  Serve immediately. 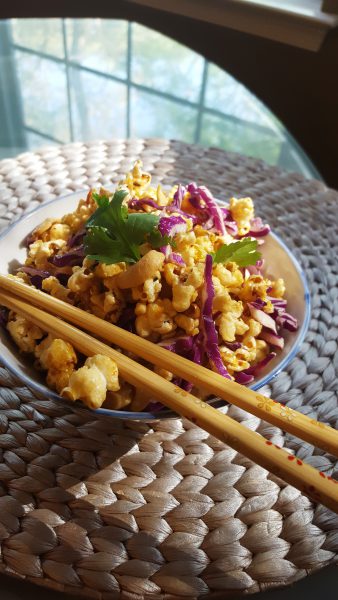 This recipe defies both description and categorization; hence, I didn’t know whether to tag it as a vegetable side dish, snack, slaw, or ???  I suppose it could even be a main dish.

But, no matter.  Whatever you call it or whenever you eat it–I was starved, so I invented it on the fly and devoured it for “brunch” today, as I am home on Spring Break with a bit more time to experiment–you will love it, odd as it sounds.

Be sure to serve it in a pretty Asian bowl with chopsticks to make a mouthwatering presentation that is as fun to eat as it is pretty.

3 tablespoons vegan sour cream (you could use mayo or the thick part of coconut milk that separates in the can, but I wanted less calories)

1-2 tablesoon vegan fish sauce (sold as vegetarian in Asian markets), lime juice or half of each

1/2 cup shredded purple cabbage (I buy it shredded in the bag; the type with some shredded carrot mixed in would be delicious too)

In a medium-large bowl, melt butter with sour cream in microwave for 30 seconds to a minute.whisk in curry paste and fish sauce.  Fold in remaining ingredients, except garnishes.  Pile into two small Asian-style bowls, garnish with cilantro sprigs and cashew halves, and serve immediately with chopsticks so that popcorn doesn’t become soggy. 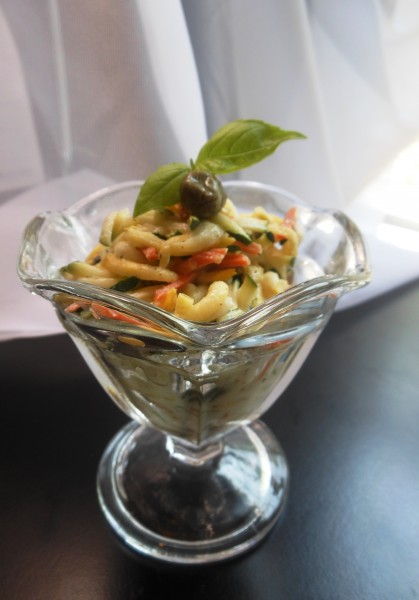 Recently, I enjoyed coffee (actually an iced soy chai latte for me!) with a former art student who just graduated from college (with a minor in art!).

Her family has long tended a bountiful garden, so she brought me beautiful squash among other specimens.

Planning for a beach picnic with a good friend yesterday evening, I thought that maybe a squash and zucchini slaw–with some shredded carrots I had on hand and basil from my own herb garden–would be the perfect accompaniment to our Vegan Baked Bean Crostini…and it was!

This beautiful slaw goes together in a flash but looks and tastes very special.

Toss together shredded vegetables and a pinch of salt, place in a collander, top with a plate and something with a little weight–like a can of beans–on top and let drain for about 20 minutes.  Then, in a medium bowl, toss together all remaining ingredients, including more salt to taste.  Cover and chill until serving time.  Toss and serve garnished if desired with whole capers and basil sprigs. 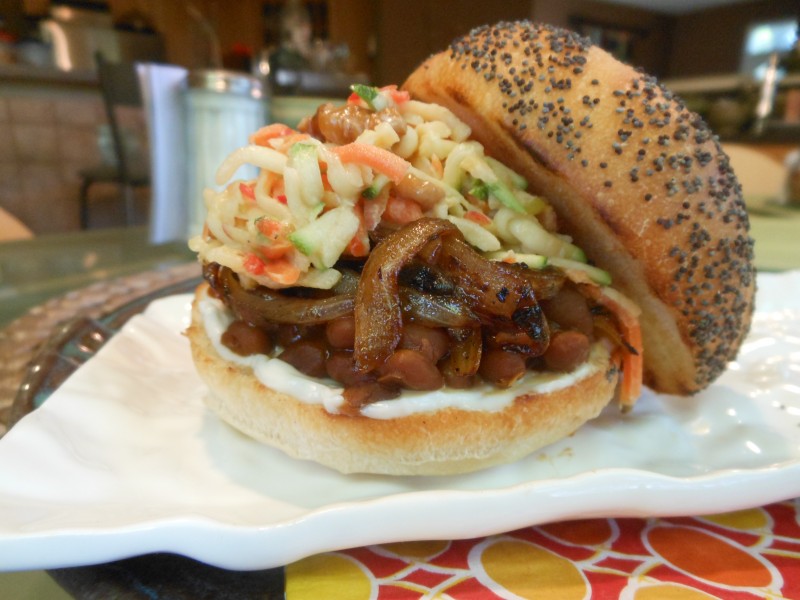 My new Fall Festival Slaw was the inspiration for this delicious sandwich.  After I made the luscious slaw, though, it seemed to cry out for tangy BBQ beans and sweet caramelized onions.  Oh boy, what a great combination, though the slaw is a beautiful side dish on its own.

For each sandwich, spread bottom piece of bread with about 1 tablespoon or less of mayo.  Top with 1/4 of the beans, 1/4 of the onions, and about 1/4 cup of slaw.  Serve immediately.

Note:  I use the grater attachment of my food processor to grate vegetables, as it creates a nice julienne style shred.  You will have slaw left over.

1/8 teaspoon sea salt or to taste

Place grated vegetables in a colander or strainer, press gently to remove excess moisture, and let drain for a few minutes.  Transfer to a medium bowl.  Add all remaining ingredients and combine will with a fork.  Cover and refrigerate until serving time.  Stir again before serving.

Heat oil in a large cast iron skillet over medium-high.  Add all remaining ingredients and saute, stirring frequently, for about 15 minutes or until preferred degree of caramelization is reached.  Reduce heat if cooking too fast. While onions caramelize, prepare beans.

Use your favorite BBQ bean recipe or:

1-15.5 ounce can vegetarian (which are actually vegan) barbeque beans (I used Bush’s brand with bourbon and maple syrup)

In a small cast iron skillet or saucepan, heat together all ingredients, cooking for 7 or so minutes until thick and a little “sticky” to intensify flavors and insure that the beans will hold together nicely inside the sandwich.  Remove from heat.  Note:  you may need to tweak amount of mustard and vinegar or you may even need to add turbinado sugar depending on the type of beans you pruchase.  Mine were already sweet, so the mustard and balsamic vinegar balanced the flavors beautifully.