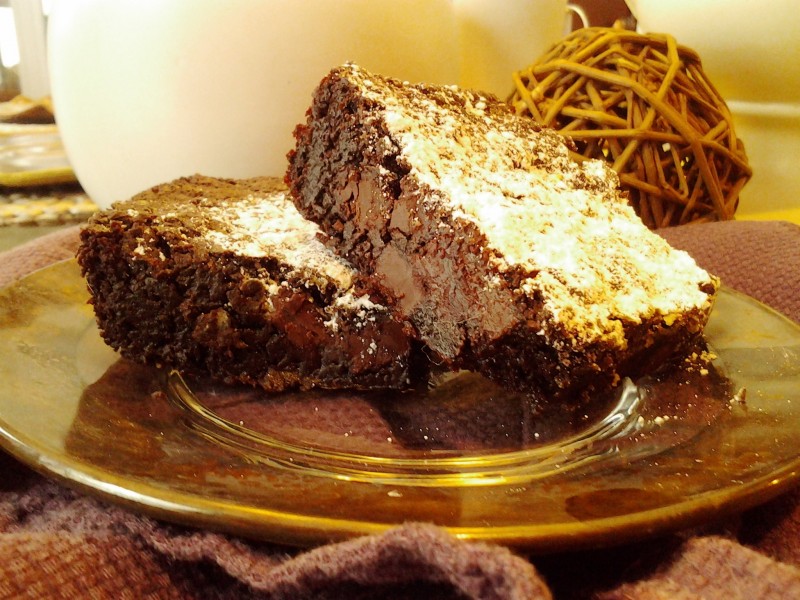 Stop!  Toss out any other brownie recipes. Seriously, this is the only one you’ll ever need!

Recently, one of my students brought the darkest, most beautifully textured brownies that I have ever seen to a meeting.  I resisted as long as I could and then took a tiny pinch for the sake of research and just about swooned.

When I remarked on how deep and darkly fudgy they were, she explained that it was her use of cocoa powder instead of melted chocolate.  But, in fact, it was the amount of cocoa powder, because my formerly “best” brownie recipe calls for cocoa powder, as well, and they are no comparison…and they have one-third less cocoa powder in them!

She was only too happy to share the non-vegan recipe, one she had found online that claimed to taste like “box mix brownies.”  That is nothing to brag about, in my opinion and, fortunately, these are vastly superior to a box mix.  I knew the recipe would include eggs and, indeed, it called for 2.  Normally, subbing other ingredients for eggs is no problem in cakes, pancakes, etc. But in something like a perfect brownie in which the texture is absolutely critical, it can be very tricky indeed.

My first attempt was an epic fail.  I created something sort of like oily fudge–not much like a brownie–and not nearly as good.  I ended up scooping up spoonfuls of the mixture which, even after cooking, was more akin to a truffle mixture, forming it into balls, inserting a pecan half, and rolling in powdered sugar.  Not bad, but not what I was going for.

So, knowing I would have to work harder on the egg substitute, I scanned a long list of alternatives, none of which sounded quite right, as I’m not a huge fun of Ener-G egg replacer, flax seed egg replacer, etc.  I also didn’t want to use an ingredient like applesauce, as I felt its tanginess would clash with the chocolate.  And, while I love banana and chocolate together–think banana split–I didn’t want that pronounced banana flavor.  But I liked the idea of the moisture and consistency of both applesauce and bananas, and it occured to me that pureed pumpkin might be perfect, as it’s mellow flavor wouldn’t be too assertive and its warm color would only enhance the deep, rich brown of the chocolate.

So I made up my own substitution using pumpkin plus leavening.  For each egg, up to 2 in a recipe, substitute 1/4 cup canned pureed pumpkin, 1/2 teaspoon baking powder, and 1/4 teaspoon bakng soda.  My addition of a  pinch of Cream of Tartar helped activate the baking soda.  I don’t know if the Cream of Tartar is really necessary, as it is actually an ingredient in baking powder which I also use in the recipe.  But, the brownies were so good that I hesitate to make any changes.  One day I will probably try it without the Cream of Tartar and will adjust the recipe if that ingredient seems superfluous.  The cornstarch, called for in the original recipe, absorbs mositure, prevents baking soda and acids from reacting too quickly, and lends tenderness to baked goods.

The results were spectacular!   I have removed my old brownie recipe here on The Blooming Platter and hereby pronounce Blooming Brownies my go-to most-favorite brownie recipe of all time.  And I hope you agree!

1 1/4 cups granulated sugar (I use demerara)

5 tablespoons vegetable oil (I use canola for its neutral flavor)

3/4 cup vegan chocolate chips, small chunks, or a combination (you may use about half semi-sweet chocolate and half dark chocolate if desired)

Preheat oven to 325 degrees.  Spray the bottom of an 8-inch square pan with non-stick cooking spray and line with a piece of parchment paper cut to fit.  In a microwave-safe bowl, heat butter with sugar just until butter melts.  Remove from the microwave and whisk to combine.  Allow to cool for 5 minutes and then whisk in oil, vanilla, cocoa powder and baking soda.  Transfer mixture to the bowl of a stand mixer (or use a hand-held mixer) and, on low speed, mix in pumpkin puree, just until combined.  In a separate bowl, whisk together flour, cornstarch, baking powder, salt and Cream of Tartar. Add to chocolate mixture and mix on low, againt just until no flour pockets remain.  Remove bowl from stand and fold in chocolate chips and/or chunk.  *Spread the batter evenly into the prepared pan and bake about 28 minutes or until brownies are set (begin checking at 25).  Remove from oven and allow to cool at least 45 minutes before cutting or serving.  Sift powdered sugar over the top before serving, if desired.  Store any leftovers well-covered, but not refrigerated. Note that because of the pumpkin in the batter, after sitting, the powdered sugar will turn slightly yellow, so it’s best to sprinkle only what you are serving.

*Important note: when I make these brownies, a thin “slick” of moisture seems to separate and rest on top prior to baking.  Simply press a paper towel onto the surface of the batter to absorb it before baking.  Discard paper towel.