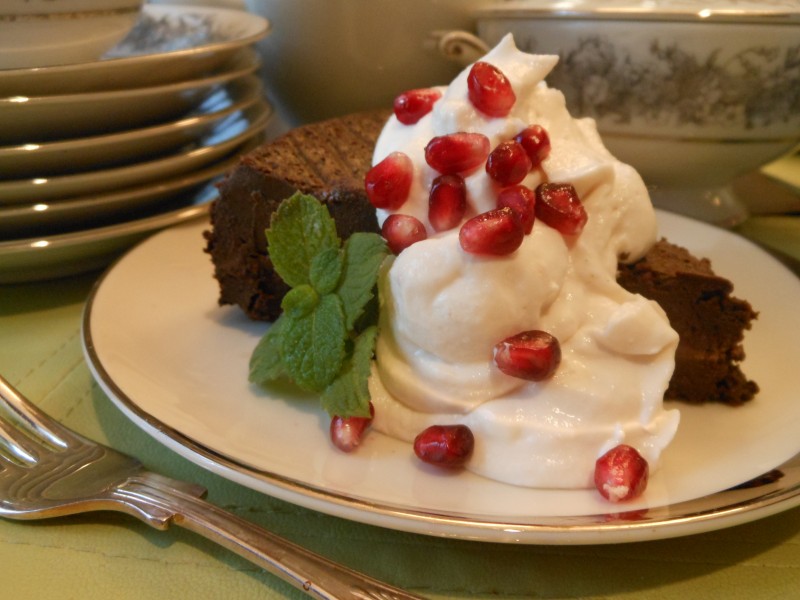 Okay, I didn’t call my Flourless Chocolate Cake with Whipped Cream the best.  Someone else did…

When my new long-distance friend and fellow (amazing) Vegan Heritage Press cookbook author, Bryanna Clark Grogan (World Vegan Feast and others), was helping me test the recipes for this dessert, she served it to friends, one of whom said, “This is the best ——- cake I’ve ever eaten!”  That’s good enough for me!  And I trust it will be for you too.

Back in my pre-vegan years in Nashville, I did some moonlighting as a catering assistant for my dear friend Monica Holmes at her award winning Clean Plate Club.  She made what can only be described as a transcendent Flourless Chocolate Cake.  Since this type of cake contains no flour, the batter relies on eggs for structure and lift.

I knew there had to be a way to veganize it, but the recipes I’d researched, including from people I respect in the field, looked and sounded like vegan chocolate cheesecakes made with tofu or they contained beans and appeared a bit dry with a crackly top, or they actually included some flour.  I’m sure all are delicious, but they aren’t what I wanted.

I wanted something as dense, moist, silky and rich as the original.  And that’s what I got, but not until I had baked the cake about 5 times (and made the cream about 7)!  At least. The first try was an unmitigated disaster.  But it had potential, and that just spurred me on to redouble my efforts.  Meanwhile, the generous Bryanna, in British Columbia, was doing the same with the recipe revisions I’d send her, and we were comparing notes.  Bry, I love you for many reasons, including your help with this feat o’ chocolate and cream!

My version of the cake is, indeed, based on tofu, but it has some “secret” ingredients responsible for its fabulousness which you are sure not to confuse with cheesecake.  It’s its own brand of wonderful.

And the cream, well, it is truly revolutionary.  At least, I could find no similar recipes online.  As you can see in the photo, it is a beautiful thing to behold. Plus, it is fat-free, cholesterol-free, soy-free, gluten-free (if your extracts are gluten-free), and low calorie!  Not only that, but it is delicious and a breeze to make.

For a very long time, I had been thinking that there had to be a way to make homemade vegan whipped cream from one of the vegan creamers.  I love both savory and sweet cashew cream, but it is a little heavy and thick, calorie laden, and distinctively flavored.  Ditto coconut cream aerated in one of those n2o cartridge-powered whippers.

The Recipe and Thanks to VegNews

Many thanks to the brilliantly talented and generous food editors et al at VegNews for publishing these recipes in “What’s Cooking” online.  Please click right HERE to be taken directly to their site for both.  And while you’re there, if you haven’t already, enjoy all the good things VegNews offers its readers on a daily basis.

I’m posting this recipe now just in case you, like me, are offering chocolate for the first time for Thanksgiving.  But, personally, I think the winter holidays are the dessert’s time to shine, dressed up with a little pomegranate seed bling, as in the photo, or a bit of crushed peppermint.  In the summer, it has to be raspberries.

Happy Thanksgiving to you and yours!