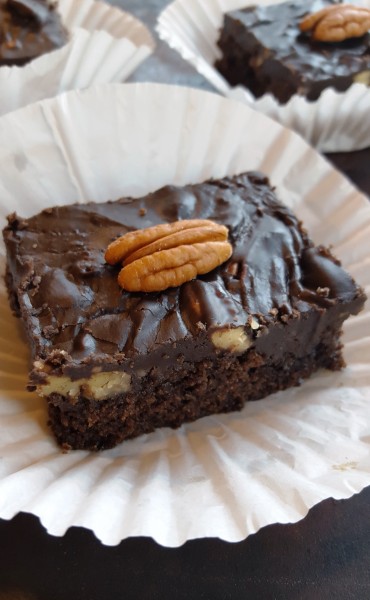 [Special thanks to Go Dairy Free for including this recipe on their website…three times now..read on to see why.]

If you have ever perused a “church cookbook,” as we call them “down South,” then you’ve seen the dairy version of this recipe made with Coca-Cola.  And if you’ve been to a “dinner on the grounds” at said south’ren church, then you’ve surely seen such a cake if not tasted it.

It appears to be a basic chocolate sheet cake, but it is oh-so-much more: dense, moist, and–though it contains a small amount of cocoa–very chocolatey and caramely from the cola.

This is my third and final iteration of trying to veganize this old classic.  Why final?  Because I finally got it.  I posted the previous two versions because I thought I had it each time.  The moistness and flavor of the most recent was spot-on, but it sunk a bit resulting in a layer of frosting as thick as the cake.  Now, this isn’t a huge problem in my book, but, for the sake of keeping up appearances, this latest version is perfection.

For the authentic flavor of the original, I recommend using regular natural unsweetened cocoa powder. But for darker color and a richer flavor profile, try the Special Dark cocoa, which is a blend of natural and Dutched cocoas.

2 cups all purpose flour (I use white whole wheat)

2 cups natural sugar (I use demerera)

1 cup natural cola (or if you drink Coca-Cola, by all means)

Preheat oven to 350 degrees.  Grease and flour a 9 x 13″ baking pan and set aside.  In a large bowl, whisk together flour, sugar, baking powder and baking soda.  In a small bowl, whisk together soymilk, vanilla, vinegar (to create a curdled “buttermilk”), and flax seed meal.  In a small saucepan over medium-high, heat butter, cocoa, and cola just to boiling, reduce heat and stir occasionally until butter is melted; remove from heat.  Make a well in the center of the flour and sugar mixture.  Pour soymilk mixture followed by butter mixture into the well.  Whisk just until smooth and well combined.  Transfer into prepared baking pan and gently smooth top.  Bake for approximately 25 minutes, checking for doneness with a wooden pick inserted in the center after about 20.  Place pan on a wire rack and make frosting which must be poured over a warm cake.  Smooth frosting over top of cake, garnish if desired with pecan halves, cool completely, and serve.  Store leftovers covered in the refrigerator, but bring to room temperature before serving.

In a large saucepan, heat butter, cocoa, and cola over medium-high to boiling.  Reduce heat to a simmer and stir occasionally until butter is melted; remove from heat.  Whisk in confectioner’s sugar, one cup at a time, until smooth and completely incorporated.  Stir in optional pecans and frost cake immediately.