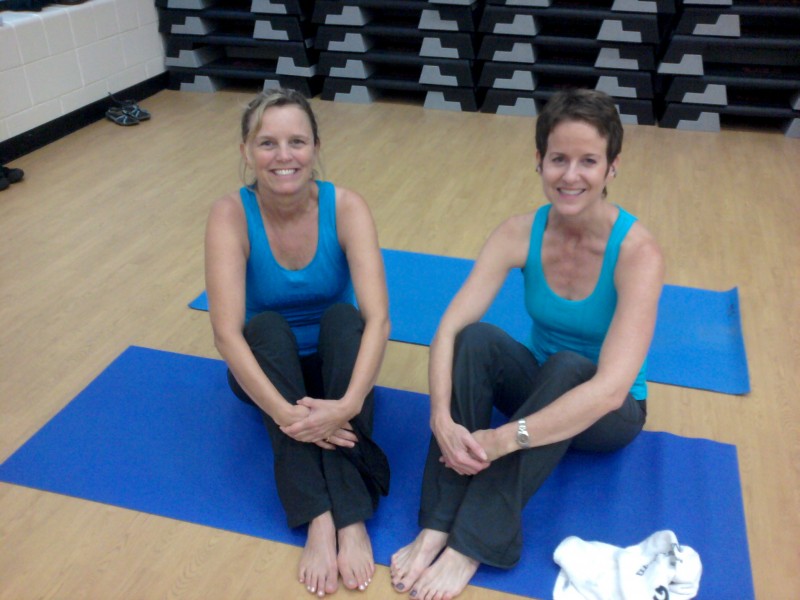 The yoga movement of a few decades ago passed me by.  But I’m making up for lost time!

I spent my youth taking ballet classes, avidly walking, and, in junior and senior high school, cheerleading.  I am a “rabid” walker to this day and I still take dance classes.  But, in graduate school, I was bitten by the aerobics bug–leg warmers and all–which I participated in and even taught for many years.  But one day, I woke up and thought I would run the other direction if someone ever yelled at me to do another knee lift over a pounding soundtrack.  Or, “dog” forbid,” I yelled at someone to do the same!

Also in grad school and/or after, I ice skated a bit, played a little (and I mean a little, like one season) co-ed volleyball, lifted a few weights, and rollerbladed on weekends.  I even ran for 6 months or so until I developed plantar fascittis.  But weightlifting eventually replaced aerobics and I became a gym rat for a long time, up until about 2 years ago when The Blooming Platter Cookbook entered my life.

I worked out at home on the TRX while I was writing and launching the book and began taking Pilates which I still do every Wednesday evening.  But after being away from the gym for so long, I decided that clanging heavy weights around was not what felt like the best fit anymore.

In our town and I suspect yours too, yoga studios had begun to proliferate almost like nail salons and martial arts facilities.  On two teacher friends’ recommendations, I tried this ancient practice last January at our local rec center and was hooked. My husband has been practicing for eight years!  (We are SO fortunate in VA Beach to have an impressive system of municipal recreation centers.  Shame on me for living here 21 years before ever darkening the door.) I practiced twice a week there until summer break when I added two more morning classes taught by a PT who owns Green Turtle Yoga–talk about body knowledge–at the dance studio where I take Pilates.

When school began in September, I had to give up those morning classes, so I started shopping around.  It’s too late to make a long story short, but suffice it to say that I now practice four to five times a week through a combination of classes at the rec center (the best buy around), Angela Phillips Yoga, Atma Bodha Yoga, and Hot House Yoga.  All of these establishments offer outstanding instruction, some with more rigor and longer classes than others, so the combination is ideal.

In the photo, Katherine Jackson, a writing professor at Old Dominion University’s VA Beach campus and one of my dear friends who recommended rec center yoga, showed up unexpectedly at class last night, as the facility closer to her house no longer offers yoga.  We were delighted to see each other–our last visit was in July on our long hike through the Dismal Swamp to Lake Drummond–but tickled that we were not only dressed almost identically in turquoise tops and gray yoga pants, but bearing the same color mats!  So we had to have someone snap a quick photo of the Yin and Yin Twins before class.

Get thee to a yoga class and “go to your mat,” as they say!