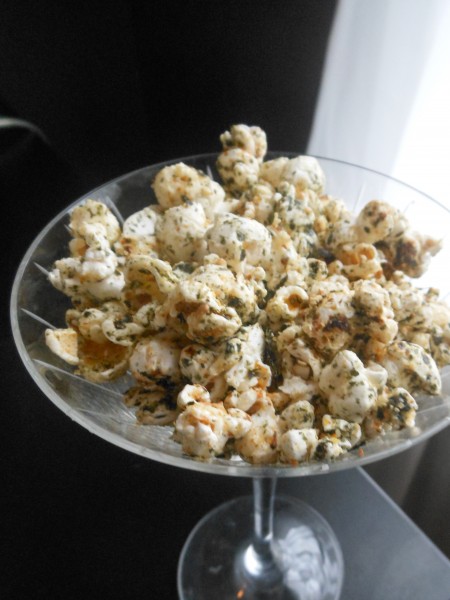 I am obsessed with this popcorn!  479 Degree brand popcorn makes a Toasted Sesame and Seaweed variety to which I developed an addiction. Then, sadly, our Kroger quit carrying it.  I guess my addiction wasn’t very widespread.

So, I decided I would have to learn to make my own, but before beginning to experiment, I did a little internet research and learned that there is something very similar that hails from Hawaii called “Hurricane Popcorn.”  It is made with a Japanese spice blend called Furikake, which often contains fish and MSG in addition to seaweed, sesame, sugar and salt.  I quickly decided to make my own.

Following is my easy and addicting recipe that includes a little soy sauce, sesame oil, Sirachi, and dried orange peel.   I recommend making it as instructed, taste, and then alter any ingredient amounts according to your own palate.

I think it is perfect as is, having halved the amount of sesame seeds with which I starated, as I felt their flavor overwhelmed the other ingredients.  But you may want to tweak.  For instance, I love the bold taste of seaweed, but if you’d like just a hint of the sea, use only 1 sheet of nori.

It is best if the popcorn is just popped and warm when you season it up.  But it is darn good made with pre-popped popcorn in a bag and almost as good the next day if leftovers are stored in an airtight container.  Leftovers?…ha!

1/4 teaspoon sea salt or to taste