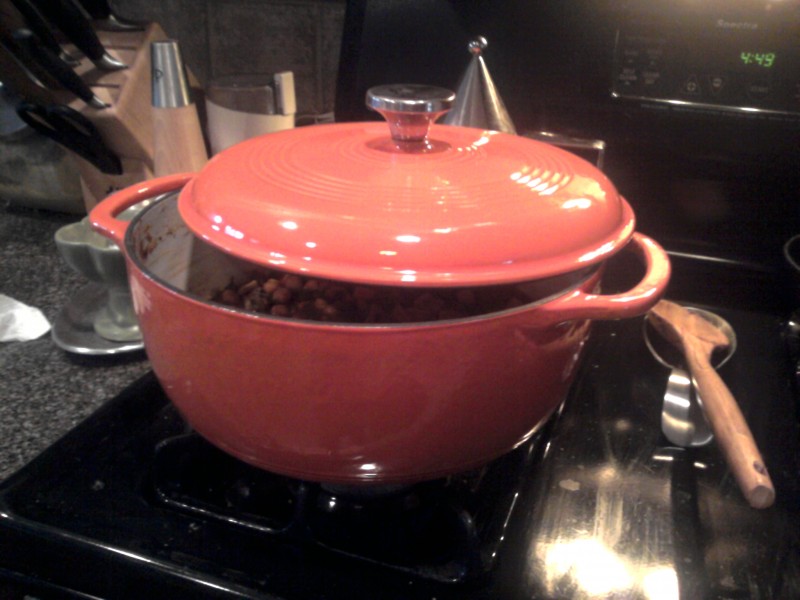 Recently, when I went on a mission to create “THE BEST” Vegan Gumbo, I started feeling the itch for a Dutch oven.  You  know, the ones for which the brand name Le Crueset is synonymous.  (Theirs are, technically, “French Ovens.”)

These cooking vessels are enameled cast iron beauties that do what they do (like braise) without parallel in the culinary world.  Or so one would believe…

Fortunately, when I waltzed into one of our high-end kitchen boutiques on a whim, ready to make the commitment, they didn’t have the size and color I wanted in stock–and it was a few days before “pay day” anyway–so my impulse buying was derailed.  Fortunately.   By vowing to come back after “pay day” to place an order, I inadvertently saved myself about $250!

One of my close foodie friends who works part-time at the shop saw me on my way out, inquired about what I was shopping for, and when I told her, she quietly asked, “Have you looked around?”  That planted the seed for the prudence of doing a bit of online research, which I actually enjoy doing unless it gets to protracted and baffling, say, when researching something technological, like a camera.

When faced with a technical culinary question, I typically turn first to two sources: the Food Network’s mad kitchen scientist Alton Brown for cooking questions, and Cook’s Illustrated/Cook’s Country for both cooking and product-related questions.

The latter highly recommended the Tramontina 6-quart enameled cast iron Dutch oven available, believe it or not, at Wal-Mart among other places.  It currently retails for $59.97 there and a bit higher elsewhere.  So, at a sixth of the price, I thought, “Why not?” as I rarely second-guess Cook’s Illustrated.  But I wasn’t wild about the limited color selection, so I decided to read some reviews which, despite the Cook’s endorsement, weren’t glowing.  One of the biggest complaints seemed to be an ill-fitting lid which is problematic when the point is to contain moisture.  And I began to have second thoughts.

The gold standard for enameled cast iron Dutch ovens is unquestionably Le Creuset, but I wasn’t sure I needed an “heirloom” pot.  I certainly wanted excellent quality, but I also wanted a good value.  So then I heard about a highly touted Costco brand called the Kirkland.  It’s 6-quart model sells for in the neighborhood of $50 as well.  But, again, the colors were limited, though the reviews I read were a bit more convincing.

Certainly, Calphalon, Staub and all the major manufacturers of high- to moderate-end kitchen equipment make their own versions.  But since I wasn’t sure how often I’d use the pot–there are just the two of us dining most weeknights (if you don’t count Minnie and Huff!)–I really didn’t even want to spend $160 or so.  Then I remembered that I had seen both jewel- and earth-toned enameled cast iron Dutch ovens by Lodge, the makers of my cast iron skillet and grill pan which I use virtually every day.  Indeed, the reviews were excellent, the price was right at Ka-Tom Restaurant Supply ($57.75 + $12 shipping), and it came in my color of choice: rich “Pumpkin.”

The only negative I recall was that one reviewer said the lid was made with 3 raised points so that it would sit flat like a three-legged stool on the pot rim without the extra expense/labor of planing it to fit flush.  Hence, some steam escaped.  But either that reviewer or another one said he had heard that Lodge had started planing their lids for a perfect fit so that escaping steam is no longer an issue.  Plus, the pots have an anti-chip coating, a fairly common issue with Dutch ovens.

Convinced, I decided to take the plunge, ordered it, and it arrived this week with a perfectly fitting lid, no chips, and in a glorious pumpkin tone.  It is so handsome and a perfect weight.  Everything feels exactly right about it from the lid knob, to the handles, to the way my bamboo spoon glides across the interior surface. I was happy to rearrange a cabinet so that it had it’s very own, easily accessible storage spot.

It’s maiden voyage was a vegan tagine I made yesterday for a dinner with two gal pals last night (Joe is out of town–home today!), and I couldn’t be more thrilled.  I will post that recipe soon, as it is definitely a keeper!  The pot cooked it beautifully, creating lots of moisture and allowing yummy caramelized browned bits to form but not stick on the bottom.  And it cleaned up in a breeze.

If, like me, you’ve been contemplating such a purchase, but have yet to commit.  I highly recommend the enameled cast iron Dutch oven from Lodge, a trusted, long-established, American company.