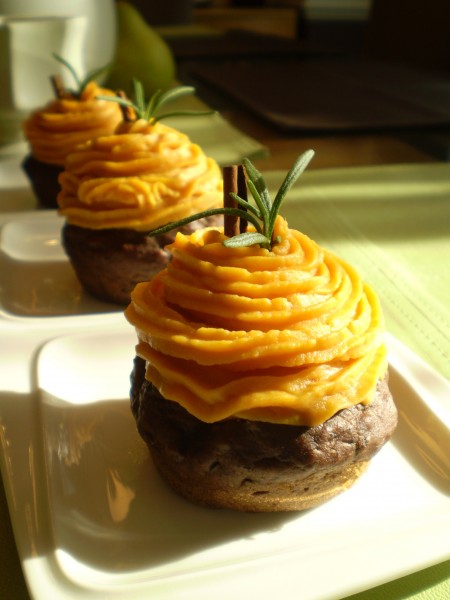 I am so excited for my Vegan Savory Mexican Black Bean Cupcakes with Sweet Potato Frosting to have made “The Big List of Ghoulishly Good Dairy-Free Halloween Recipes” for 2013 on the Go Dairy Free website!

I created this recipe last Halloween and I’ve never run across anything else like it before or since.  Beautiful, but simple, these savory cupcakes are like eating your deliciously moist sides and bread all in one festive little package.

What does one do when Alisa Fleming, founder of GoDairyFree, asks if you have a recipe for Halloween to share with readers of her website?  You get busy! 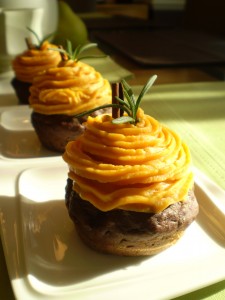 I have created quite a few recipes for pumpkin dishes, which are here on my blog and in my new cookbook.  But I really didn’t have anything fun, different and delicious in traditional Halloween colors.

However, since I love a challenge, I created a recipe especially for her readers and it’s exciting to be able to share it with you: Vegan Savory Black Bean and Salsa “Cupcakes” with Whipped Sweet Potato “Frosting”!

My first attempt was a bust.  Those dry and flavorless bad boys–and I do mean bad–ended up out in the woods on our property!  But after some brainstorming, it occurred to me that I could use super flavorful salsa for both flavor and moisture and that did the trick–yum!

Sound odd?  Well, this recipe is a little out of the ordinary, but Alisa and I think the cupcakes are so good it’s “scary” (sorry, I couldn’t resist the corny Halloween reference.)  She writes:

“I’m very excited for the recipe feature we have today from the talented cookbook author, Betsy DiJulio. Betsy’s creativity is second only to her ability to create appealing, healthy, comfort food recipes. She never fails to surprise with unique ideas, but they are always very doable and delicious. Today’s recipe is certainly no exception. It pairs simple everyday dinner ingredients with an unexpected format, cupcakes! Since they are savory, and made without any sugar, Betsy uses salsa to add extra moisture and flavor …” 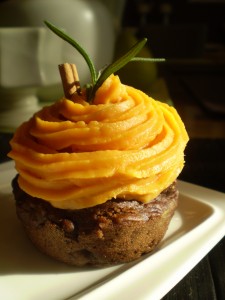 Just follow this link for the simple recipe.  And Happy Halloween!

This was a quickie I whipped up for the October pumpkin-painting meeting of the National Art Honor Society, fondly known as “Nozze,” which I sponsor at my school.

Though you wouldn’t necessarily know it from this photo, I actually have cake decorating experience. 🙂 But last Sunday night, before the meeting on Monday afternoon, I needed something sweet, vegan, black and orange, and ultra quick.

I simply adapted and doubled Isa Chandra Moskowitz’s and Terry Hope Romero’s recipe for Your Basic Chocolate Cupcakes, baked the batter in a sheet pan–even quicker than cupcakes, though cupcakes would be fine–and topped the cake with my go-to creamy vegan frosting dyed orange. A few brown-black sprinkles made for a festive presentation without a bit of fuss.

It must have been a hit, as there was scarcely a crumb left.

Preheat oven to 350 degrees. Grease and flour a 9 x 13″ cake pan. In a small, non-reactive bowl, whisk together chocolate soy milk and vinegar and set aside to curdle. In a large bowl, combine next four ingredients. Whisk or stir in oil, vanilla and almond extract until completely incorporated. Then stir or whisk in chocolate soy milk mixture just until it is also completely incorporated. Transfer to prepared pan. Bake for about 30 minutes, but check at 25. When a wooden pick inserted in the center of the cake comes out clean, the cake is done. Cool completely on a wire rack. Frost as desired. For a vegan Halloween cake, frost the cake as described below.

In the bowl of an electric mixer fitted with a paddle attachment, cream together vegan butter and shortening. Add powdered sugar until a creamy-stiff mixture forms. Add soy milk a tablespoon at a time until a creamy consistency that holds soft peaks is reached (or until you achieve whatever consistency you prefer). Beat in food coloring until completely incorporated. Frost cake and garnish with a dusting of sprinkles.