I am obsessed with the flavors of a dish called Tofu Braised in Hot Chili Oil at a local restaurant called Judy’s Sichuan. But, I could do without the deep frying of the tofu and the additional oil, as mesmerizing as it is. I have attempted a stir-fried veggie version or two in the past that were unspectacular fails.

But, recently, fellow foodie and friend, Juan Gelpi, introduced me to Sichuan peppercorns. Eureka! The missing flavor. So I started brainstorming and alighted on a non-traditional roasted prep which I love because it is hands-free cleaner, and neater.

I hope you love my tofu-less and non-braised version of Tofu Braised in Hot Chili Oil.

Hot Chili Oil is my new obsession. I made this curry as light–and tasty–as possible so I can spoon more of the peanuts in hot chili oil on top.

The dish is a sweet-spicy-salty celebration, both creamy and crunchy.

In a Dutch oven or large soup pot, combine all ingredients except garnishrs and accompaniment. Heat over medium-high until simmering. Reduce heat and simmer for 20 minutes or so, stirring frequently, until vegetables are cooked through. Serve garnished with cilantro and peanuts in hot chili oil accompanied by cucumber and onion salad alongside.

Yield: 1 main dish serving, but may also be served as a rich side dish (easily multiplies)

Similar to a loaded baked potato, only with far more juicy flavor, this loaded baked onion is liable to become a staple in your household.

I have never been a breakfast eater–Just give me a chai tea with non-dairy milk and I am good to go–so while I walked each of our dogs for their mile, from 10 until 11, I was contemplating what I might enjoy for an early-ish lunch.

I haven’t been to the grocery store in a bit, so I was also mentally scanning the pantry and fridge as I walked. I wanted something that tasted decadent but was actually quite wholesome. For some reason, I lighted upon a baked onion. My luscious version turned out to be only 300 calories and ready in a snap because I actually cooked it in the microwave and then finished it under the broiler.

It is as addicting as homemade caramelized onion dip, but without the fairly empty calories of potato chips. Win-win!

Spray a gratin dish with vegetable spray, place onion inside, lightly spritz onion with soray, and sprinkle with a hint of sea salt and freshly ground black pepper. Cook uncovered in microwave on high setting for 10 minutes. Remove and gently cut an x into top of onion with a serrated or sharp knife, about half way or 3/4 of the way down, being careful not to burn yourself. Preheat broiler. Spoon minced garlic down inside onion and top with shredded cheese. Spritz again with vegetable oil spray and broil two or three minutes or just until top is bubbly and brown. Remove from broiler and top with butter, sour cream, parsley, green onion slices, smoked almonds, and smoked paprika. Serve immediately.

Yield: 2 large servings or 3 to 4 with sides

Pantry and fridge staples and about 20 minutes are all you need to put together this creamy, fragrant, addicting, and super healthy dish that is sure to become a “staple.”

1-15.5 ounce can chickpeas, rinsed and drained

In a large cast iron skillet, bring salted water to a simmer. Add onion, garlic, ginger, and spices, and saute, stirring occasionally, until onion is tender. Add tomatoes and chilies, and heat through. Add spinach and cook, stirring, until spinach is wilted. Add chickpeas and half-and-half, and simmer for 10 minutes or so until flavors are melded. Serve alone or with basmati rice.

I created this addicting dish out of what I had in the refrigerator, but feel free to substitute leeks for onions, kale or chard for spinach, bell peppers or mushrooms for carrots, and so forth.

I use an indoor grill pan, but you can just “griddle” sausages and celery over medium to medium-high heat in a skillet sprayed with non-stick spray for a couple of minutes until they develop color on both sides.

In a large skillet, add to caramelized onions All remaining ingredients and simmer over medium to medium high until a thick sauce develops and luxuriously coats all the other ingredients.

Serve over rice or over my easy, no filler, rice cakes.

Dinner on Friday night was delicious, nutritious, beautiful, and almost more than I could eat…but only 25O calories.

We had considered Chinese takeout, but I didn’t want to get back out after walking the dogs. So with Asian cuisine on my mind, I did a mental scan if what was in the fridge and created this satisfying and beautiful bowl.

Be sure to enjoy it with chopsticks; it is so much more fun that way.

Barely cover the bottom of a large skillet with water. Saute cabbage and green onion, just until slightly tender, but still bright in color. Add edamame and do the same. Add all remaining ingredients in order and heat through, stirring until hot and well-combined. Serve immediately in a bowl garnished with a sprig of cilantro. 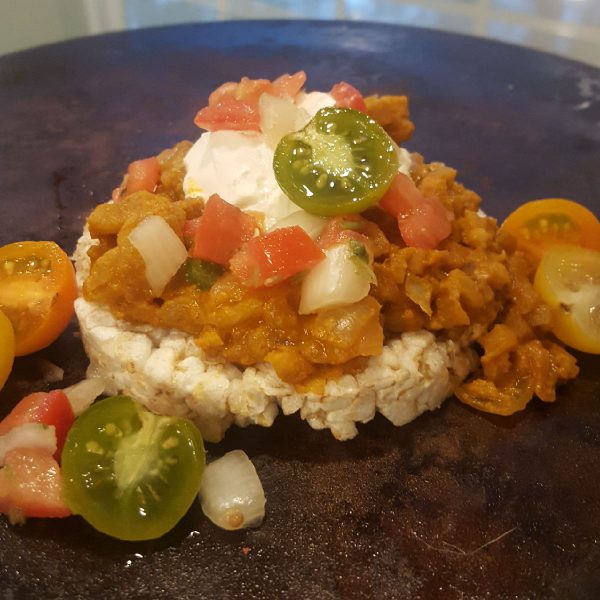 Honestly, this filling is a rave and impossibly healthy.  Not only is it made with no oil, but no calorie-dense ingredients like nuts.  It is made from what virtually everything I make is made from nowadays: riced vegetables, but you would NEVER know it.  Rich, thick, and beautifully spiced, this filling can be used in tacos, enchiladas, burritos, and quesadillas or spooned over nachos.

2 cups riced vegetables (I used a hash made of cauliflower, broccoli, and carrot, but any single or combination of these vegetables would work great)

1/2 to 1 teaspoon sauce from a can of Chipotle Chilies in Adobo Sauce (it is very spicy, so you might want to start with the smaller amount)

Add water to a large skillet just to cover the bottom.  Heat over medium to medium-high heat.  Add onion and garlic and saute for a few minutes, stirring frequently, until tender.  Add riced vegetables and enough water to not quite cover.  Cook, stirring frequently, until vegetables are tender and moisture is mostly evaporated.  Stir in cumin, smoked paprika, cilantro, bouillon cube, Adobo Sauce, and sea salt to taste.  Stir in cauliflower cheese sauce and heat through.  Serve immediately.

Serving note: I love it spooned over a brown rice cake and topped with a dab of vegan sour cream, a spoonful of pico de gallo, and two or three halved cherry tomatoes.  A sprig of cilantro would be just right, but I didn’t have any for the photo shoot. 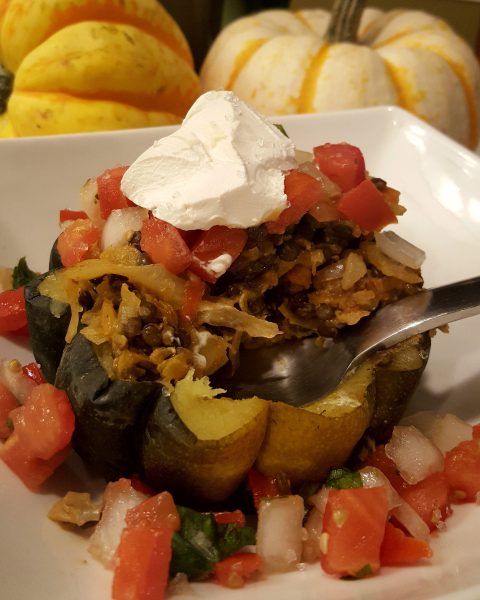 This was my delicious, lo-cal dinner on a recent autumn evening.

No real recipe, but one big secret: while my acorn squash roasted, I cooked a few french lentils and mixed them with sauteed onions, carrots, and, wait for it… shredded cabbage(!), all seasoned up with cumin, smoked paprika, and sea salt. Yummm!!!!!

Lentils are somewhat high in calories because they are nutrient dense, so I added additional bulk, nutrition, fiber, texture, and flavor with almost no-calorie cabbage.

I topped the beautiful little mound with pico de gallo and a dab of vegan sour cream. What a beautiful meal enjoyed on the deck in this cool weather with a glass of even cooler Prosecco. 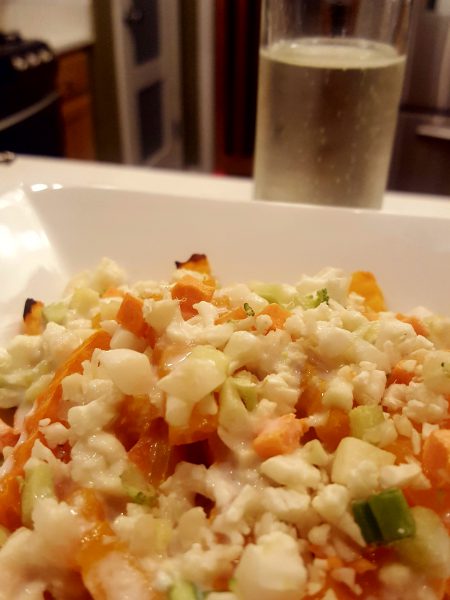 Who is all-in for a 250 calorie dinner that is decadent, delicious, and nutritious?  Of course you are!

20 ounce crinkle cut butternut squash fries, sprinkled with sea salt, and roasted at 450 degrees for about 20 to 25 minutes (They won’t be crispy, but they will be firm and delicious; roast longer if you can wait!)

Place roasted fries in a shallow bowl or on a plate, top with confetti vegetables, drizzle with Mayo, and sprinkle with sea salt to taste. Dig in. What satisfying textures! I love to eat them with chopsticks even though there’s nothing Asian about them. It’s just more fun.