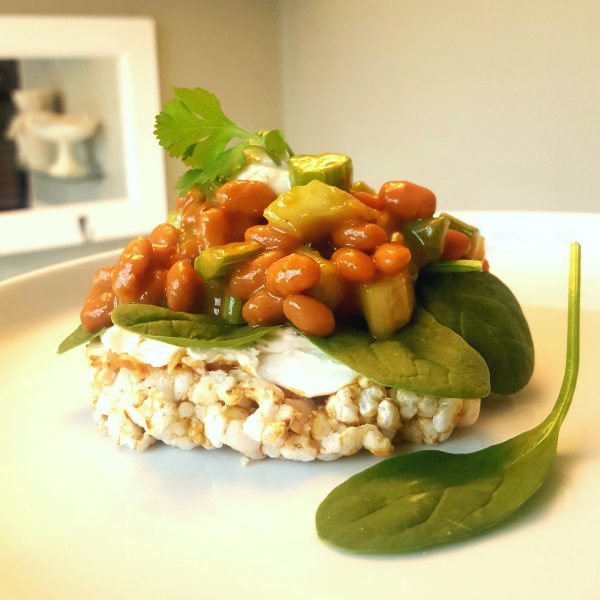 This quick stir-together is an homage-with-a-twist to my late mother who would make Baked Bean Sandwiches with leftover baked beans on toasted bread.  On a trip to England, I learned this is quite British, but I am not sure if she knew.  She was just a thrifty, inventive cook.

It is better made with baked beans that have actually been baked to develop that thick, caramelized ever-so-slightly molasses-y “tar” around the edges of the pan, but straight out of the can works too.

Besides not serving the filling on ricecakes, which were as yet uninvented when I was a kid, Mother didn’t use the chipotle, cream cheese, spinach, or cilantro garnish and you don’t need to either.  It is a winning combination regardless.

1 tablespoon vegan mayo ( I recommend my tasty Blooming Platter version at 10 vs. 100 calories)

1/2 to 1 teaspoon Adobo sauce from a can or jar of Chilies in Adobo (careful–this packs some heat!)

Combine beans with celery, green onion, mayo, and chilies with Adobo.  Spread 1 tablespoon cream cheese on each ricecake, top with about 8 baby spinach leaves, half the bean mixture, a dollop of mayo, and a cilantro sprig.  Serve immediately.