It’s time for Q & A Tuesday, The Blooming Platter’s first Tuesday focus on a “featured force” in the vegan culinary world shamelessly adopting  Donald Lipton’s Q & A format from “Inside the Actor’s Studio.” 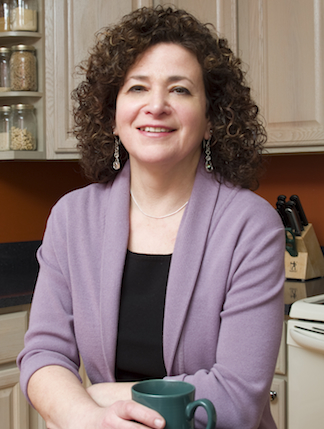 Nava Atlas has written many well-known vegetarian and vegan cookbooks, most recently Wild About Greens, Vegan Holiday Kitchen, and Vegan Soups and Hearty Stews for All Seasons.  Her site, VegKitchen, is one of the leading web resources for vegan recipes and plant-based kitchen tips. Nava is also a visual artist, whose work has been shown nationally in museums, galleries, and alternative art spaces, and is part of numerous museum and university collections. Specializing in limited edition artist’s books, her personal work deals with themes of gender and social justice. You can see more of her work at Nava Atlas Art. Nava lives in New Paltz, NY, not far from her beloved NYC.

What is your favorite word?
When I first saw this question, I though it was for any favorite word, and I immediately thought of a couple of my favorite words, for no rational reason at all, barnacle and brackish. But then I realized you were looking for culinary words. I suppose if one were so inclined, one could eat barnacles that grow on a ship’s bottom in brackish water, but that wouldn’t be me. So to make a long story short, my favorite culinary word is bountiful. I guess I like “b” words in any case.
What is your least favorite word?
In terms of culinary words, my least favorite words are things like “steak” or “pork” which turn animals into the “absent referent,” a term coined by Carol J. Adams.
What turns you on?
Again, I’m assuming you’re referring to food … I’m mainly turned on by vegetables. I’m a passionate veggie lover and have rarely met one that I didn’t like.
What turns you off?
Meat or anything that looks like meat. Yuck.
What sound or noise do you love?
A stew gently bubbling. Though I must say I enjoy the gentle sizzle that happens when you deglaze a pan.
What sound or noise do you hate?
The annoying sound of a teakettle whistling.
What makes you curse in the kitchen?
When I’m in the midst of making something and realize I’m out of a key ingredient for which there’s no ready substitute — like ginger, for example.
What profession other than your own would you like to attempt?
As you know I’m already involved in several professions — I’m a visual artist (http://www.navaatlasart.com) and a complete literature geek and nonfiction writer (http://www.literaryladiesguide.com); and in addition to producing a cookbook every year or two, I also run a very large veg food site, VegKitchen (http://www.vegkitchen.com). But if I could wake up one morning with another new skill, I’d love to be able to play the fiddle. I’ve always fantasized about that. But I’m not talented musically, so I’ll have to be content with listening to fiddle music and playing the air fiddle.
What profession would you not like to do?
I would not like to teach. I do like speaking, so it’s not about shyness, but as a natural introvert, teaching would suck all the energy out of me.
If heaven exists, what would you like to hear God say when you arrive at the pearly gates?
If there were such a thing as pearly gates or an all-powerful God or Goddess, I’d like an explanation as to why so many people are sentenced to a life of suffering and why there is so much injustice in the world. 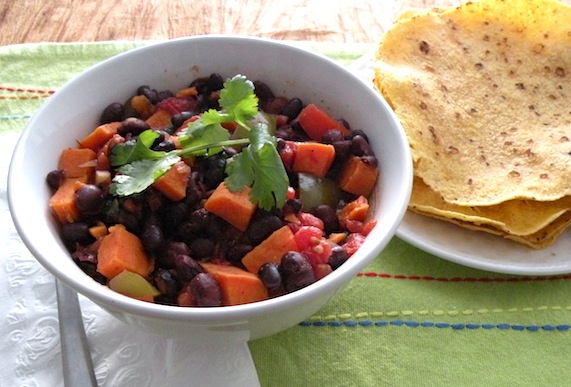 With the addition of sweet potatoes, this easy chili is filling and warming. Baking or microwaving the sweet potatoes ahead of time cuts down on both the preparation as well as the cooking time. Serve with stone-ground whole grain tortillas — they’re great for dipping into the chili, or even for grabbing some of it, soft taco style. Serve with a simple salad and/or a side of sautéed greens or steamed broccoli. Adapted from The Vegetarian Family Cookbook.

or one 8-ounce can chopped mild green chiles

1/4 cup minced fresh cilantro, or more, to taste, plus more for garnish

Bake or microwave the sweet potatoes until just firm. When cool enough to handle, peel and cut into 1/2 to 3/4-inch dice. Set aside until needed.

Add the remaining ingredients except the cilantro and salt. Add 1/2 cup water, bring to a slow boil, then lower the heat and cover. Simmer gently for 15 minutes.

Add the sweet potato dice and continue to simmer for 10 to 15 minutes longer, or until the vegetables are tender and all the flavors are nicely melded.

Stir in the cilantro, then season gently with salt. If time allows, let stand off the heat for an hour or two, then heat through as needed. Top each serving with extra cilantro, if desired.