Independence Day in the US is July 4. With leftover barbecue beans and slaw–standard menu items–but not wanting to enjoy them the same way we had on the holiday, I decided to make a quesadilla which I joking call Feedom Fusion, a blend of this American holiday fare with a favorite Mexican preparation.

There is no real recipe here. I just used the beans as the filling and the vinegar-based slaw on top. The beans were a jazzed up version of canned barbecue beans with ketchup, mustard, molasses, brown sugar, vinegar, and garlic and onion powders, baked at 350, uncovered, for an hour.

I found a 10″ tortilla in Kroger that is only 50 calories, which really appeals to me, though it may not matter to you. They are billed as high fiber and I cannot tell the difference between them and the 150 calorie version except they may be a little thinner, which is great by me.

I simply sprayed my skillet with nonstick spray, laid the tortilla in the skillet, spread the beans over half, folded it over, and cooked it for a couple of minutes on each side over medium heat. I then piled the slaw on top, drizzled it with no-calorie ranch dressing from Walton Farms that I had been sent to sample, and topped it with halved cherry tomatoes, pineapple chunks, and some jalapeño slices that were still floating in the escobeche brine, a homemade version gifted from Betsy Hardy, a dear friend.

That’s it: a flavor combo more explosive than Fourth of July fireworks.

This delicious dip offers vegans all the delicious flavors of a summer cookout without the meat, mayo, and all the rest of the animal-based products.

Sure, there are vegan alternatives, but I have never craved the vegan meats quite as much as many of my vegan counterparts. This dip allows me to enjoy the flavors of barbecue, slaw, chips, and a poppyseed bun all rolled into one light, quick, beautiful, plant-based dip.

Place all ingredients in the bowl of a food processor and pulse until creamy, but textured. Spoon into a serving bowl and sprinkle with almonds, green onions, and Everything Bagel Seasoning. Serve with chips, crackers, bagel chips, sliced vegetables, etc. (For the photo, I cut a flour tortilla into triangles and lightly browned them on both sides in a dry skillet over medium heat.) 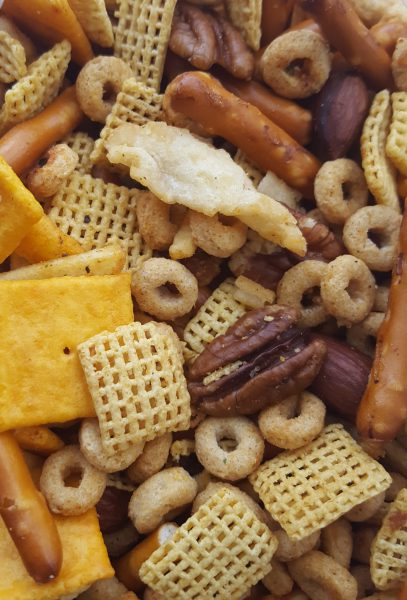 As I confessed in a previous post, I am darn near obsessed with rolling out new iterations of Chex Mix.  My adored late mother is, no doubt, doing her own share of rolling–as in rolling over–because she prefered classic, unadulterated versions of virtually all recipes, including her hallowed Texas Trash (aka Chex Mix) which made its annual appearance only at Christmas.

With new traditions the focus this Christmas, the second without her or my similarly adored late husband, I never made the Chex Mix, but I have been making up for it ever since with the creation of recipes for Taco-Fajita Chex Mix, Asian Chex Mix, Thai Chex Mix and, now, Mesquite BBQ.  The latter is COMPLETELY different from BBQ potato chips of which I am not a fan, as I find the flavor overpowering.  My Chex Mix is more subtle and complex.

If you are a purist when it comes to whole foods, fresh herbs, and shopping the perimeter of the grocery store–as I usually am–allow me to introduce you to the spice mix aisle where the McCormick brand rules in my local Kroger, though there are others.  It is a treasure trove of inspiration for, in my case, Chex Mix.

Perhaps my greatest contribution to the world of Chex Mix is the addition of ingredients not typically found in these mixes, e.g. Earth Balance “Cheddar” Crackers, French’s Crispy Onions (of green bean casserole fame), and Potato Sicks (my Asian versions include the likes of Chow Mein noodles, sesame sticks, and wasabi peas).  For this variety, I chose Corn Chex, as cornbread is the perfect accompaniment to (vegan) BBQ; Cheerios and pretzels because I love the contrast of shape and texture; “cheese” crackers, potato sticks, and crispy onions because, when I was a vegetarian in Nashville, I loved a potato, onion and cheese side dish with a crispy topping at the local BBQ joint; and pecans because I associate them with Texas and the south where BBQ rules.  But, I added some smoked almonds too because there is no such thing as too many nuts and because the smokiness is perfect in this BBQ-inspired iteration.

Choosing spice packets was challenging because of the many options.  Select whatever sound good–just check the ingredients list for whey and the like–but I ultimately decided on the combination of a mequite and a brown sugar-bourbon variety for a balance of spices, flavors–including tomoato–,smokiness, and just a hint of molasses-y sweetness.

Have fun playing with tastes and textures.  I would love it if you would share your results.  Here is mine:

2-1 to 1.25 ounce packets of vegan BBQ or grilling spice mix (I used one mesquite and one brown sugar-bourbon vareity)

1-6 ounce package crispy onions (like old timey cooks use to top their green bean casserole; French’s is a popular brand)

1-14 ounce box Cheerios (NOT the sweet ones)

Preheat oven to 250 degrees.  Place butter in large roasting pan and place pan in oven for a few minutes or until butter is melted.  Whisk in spice mix.  Then stir in all remaining ingredients in succession, gently stirring after each addition to coat with the butter mixture.  Roast for 60 minutes, gently stirring up from the bottom every 15 minutes.  Remove from oven, stir well, allow to cool completely–it will crisp even more as it cools–and package for eating or giving.  Note: I don’t find the mixture too buttery for an indulgent snack, but if you prefer to absorb a little of the oil, spread the mixture on brown paper bags or paper towels to cool. 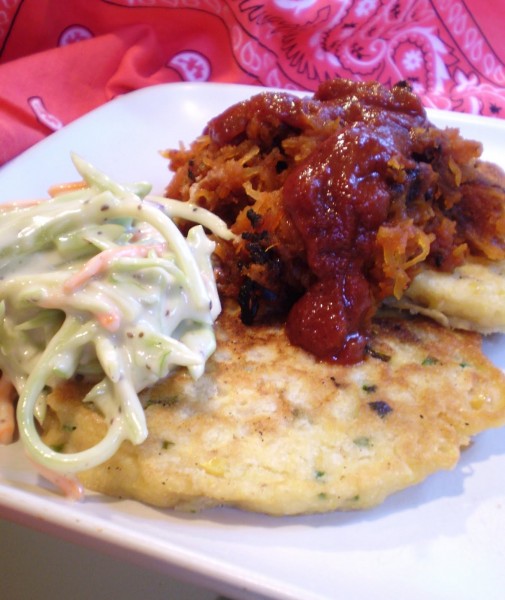 Hi all!  I’ve been on vacation for 5 days and have missed cooking and posting.

But I was delighted to return home and find a pingback related to my Vegan “Pulled” Spaghetti Squash.  Evidently, it had been featured by Karen Troughton on KitchenTreaty in 2012.   I don’t know much about this site other than what the tagline says “Vegetarians and Meat-Eaters CAN Live Together.”  But, regardless, thanks Karen!

As it happens, I found my mouth watering at the aroma of barbecue in the Houston International airport yesterday on our way home from (fabulous!) Aspen.  So, it seems that the universe is telling me that I need to remind readers about this recipe for summer BBQ enjoyment!

If you visit the KitchenTreaty post, you’ll see a couple of things:

1) That Karen created her own sauce recipe.  It contains a far shorter list of ingredients than mine but, trust me, I tweaked the flavor profile so that, at least to my palate, it is perfect!  And the only extra time involved is opening a few more spice jars.  The resulting sauce is well worth a tiny bit of extra effort.  So I wouldn’t tinker with my recipe unless you have a BBQ sauce that is your absolute favorite.

2) It appears, at least from her photograph, that her final dish ended up very moist. I like it much dryer, as in my photograph, so that the pile of “pulled” barbecue stands up nicely on it’s own, much like it’s non-vegan inspiration (see my photo above)–rather than sitting sort of puddle like on the bun. 🙂

But, however you like it–wet or dry–enjoy!  (Oh, and you’ll love my corn cakes and slaw in my recipe too!)

I thought that my vegan version of “pulled” barbecue plus tradition-trimmings-with-a-twist looked so pretty as an appetizer that I wanted to share this photo. For the recipes, just type this recipe title in the search box or scroll down four posts.

Yield: 4-8 servings (depending on how hungry you are)

My pal, Katherine Jackson, requested a veg version of pulled pork barbecue. When I told her she had me stumped (because I wasn’t sure how I could shred something like seitan in a home kitchen), she suggested spaghetti squash. I thought that was a brilliant idea. And I hope you agree.

But, for me, no barbecue meal is complete without the counterpoints of crispy-creamy cole slaw and tender “buttery” corn cakes, so I added those to the mix. I think you’ll love this trifecta of tastes. Here’s to you, Katherine, for providing great inspiration!

Heat oil in a large skillet over medium-high just until simmering and carefully swirl to coat the bottom. Stir a few spoonfuls of sauce into the squash until well-coated, but not not saturated. Add squash to heated pan and gently press into one layer, filling the skillet. Cook for approximately 3-5 minutes. You want it to char just slightly in some places on the bottom but not stick and burn. Stir or loosen from bottom if necessary. Turn the squash over one spoon- or spatula-full at a time and cook for another 3-5 minutes to achieve the same light char in places. Serve with additional sauce, heated, with Vegan Cole Slaw on warm Vegan Creamed Corn Cakes. (All recipes follow.)

Preheat oven to 375 degrees. Oil a baking pan. Split spaghetti squash lengthwise, scoop out seeds and stringy pulp and discard (compost!). Place squash halves face down on the baking pan and roast in the center of the oven for 1 hour and 15 minutes. Remove from oven to a wire rack, let sit until cool enough to handle and then scrape flesh out of shell in a flaking motion using a fork creating “shreds.”

Stir all together and heat gently until simmering. Simmer for just a few minutes to let flavors combine. Store, covered, in refrigerator.

For the Vegan Cole Slaw recipe and some 170+ more,

I invite you to purchase my first cookbook:

A Harvest of Seasonal Vegan Recipes

Memorial Day will be here before we know it. For a vegan menu that is cause for celebration, check out this link to a feature I wrote for The Virginian-Pilot:

For the grilled pound cake, try the pound cake recipe at http://aveganfordinner. blogspot.com/