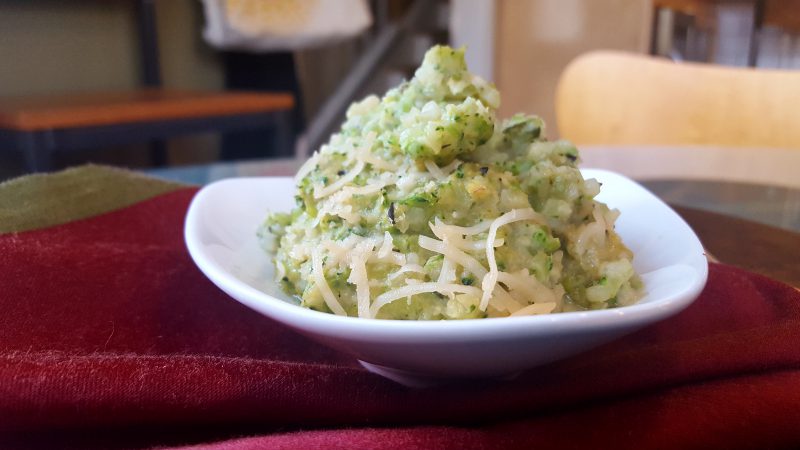 I think I have just invented legal crack!  I am a little late to the “riced” vegetable party, as I like my fried rice with, well, rice.  But, this casserole has made me a believer.

My Vegan Riced Broccoli-Cauliflower Casserole has it all:

Note: I purchased the broccoli and cauliflower already riced at Whole Foods, but you can make your own simply by pulsing chunks of both vegetables in a food processor until very finely minced.

1 tablespoon nutritional yeast (optional, but I like the flavor and health benefits; they don’t call it “nutritional” for nothing) (50 calories)

1/8 teaspoon freshly grated nutmeg (I love nutmeg in creamy savory dishes, but only the fresh)

(Note that my new Samsung gas range cooks with a lot of power.  What I used to cook at medium-high, I now cook at medium-low or low.  Seriously.  So, adjust accordingly.  I am going to recommend “medium” as a, well, happy medium.)

Heat olive oil in a large cast iron skillet over medium high heat.  Add green onions and garlic, sprinkle with a pinch of sea salt and pepper, and saute, stirring, just until wilted, about 2 to 3 minutes.  Add riced vegetables and saute, stirring, for another 2 to 3 minutes.  Add broth and thyme.  Stir well to combine and simmer for 10 minutes or until moisture is released into cooking liquid and then almost entirely evaporated.  Stir in cream cheese, 4 tablespoons of Parmesan cheese, optional nutritional yeast, and nutmeg, and heat until melted.  Stir in optional lemon zest.  At this point, you can either sprinkle the top with the remaining tablespoon of Parmesan and serve, or transfer mixture to a baking dish sprayed with non-stick spray, sprinkle the top with the remaining tablespoon of Parmesan, and bake for 15 minutes in a preheated 350 degree oven. 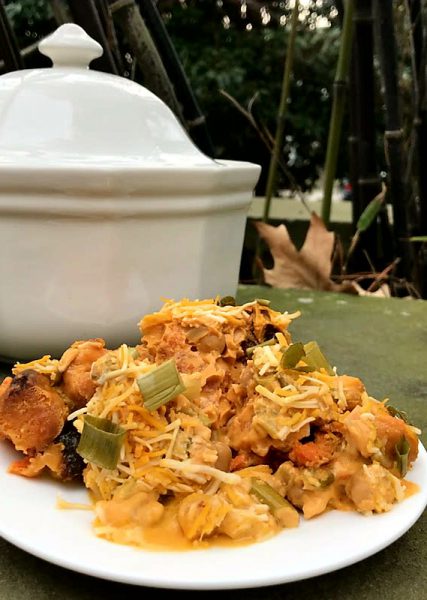 Bob and I hosted our 2nd Annual Christmas Day open house again this year. It is amazing how many people are available on Christmas afternoon. We started at 3:30 and went on for hours. 35 people graced our home with their love, laughter, and warmth, creating such a special holiday.

Oh, and they also graced it with lovely and delicious vegan food. Last year, because we were hosting Christmas dinner for Bob’s family afterwards, I just did sweets and cider. This year, generous guests wanted to bring much more food and I didn’t turn them down on their gracious offers.

Our good friend, Juan Gelpi, loves my hot buffalo chickpea dip, so I made some in my never before used deluxe stainless steel Crock-Pot, and I will definitely do that again.

With some leftovers and a house guest for the week who we ended up taking out for most every finner, I didn’t want any spoilage and waste, so I decided to make Juan and his wife, Barbara, both excellent vegan cooks, a casserole out of the leftover dip.

Let’s just say that these two serious foodies gave it a big thumbs up.  And I hope you do too. Honestly, there i nothing not to like about this intensely comforting and satisfying casserole.

In a large bowl, combine sauteed vegetables, baked tater tots, and dip.  Spoon into a greased casserole dish, sprinkle with grated cheddar and remaining 1/4 cup green onions. Bake for 20 minutes or until bubbly and heated through. 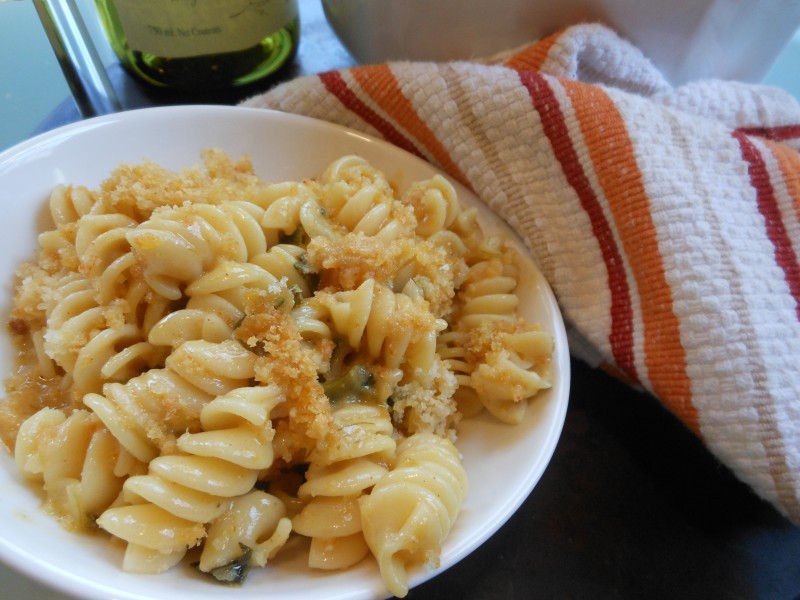 (If you want to skip the backstory and product review, just scroll down a little bit to the creamy-cheesy recipe!)

Recently, I received a big box of Go Veggie! vegan products to test.  If your preferred grocery store, like mine, only stocks Go Veggie! vegetarian products (made with casein and such) and you thought it wasn’t the brand for you, I have good news: they make quite a range of vegan cheeses and, so far, I have found them very tasty with beautiful melt-ability.  Look for the purple packaging and click here for a store locator.

Just prior to receiving the bountiful box, I had seen two unrelated shows on the Food Network in which the hosts made mac-n-cheese, so that seemed the perfect dish in which to test several of the products all at once.  Both recipes were made with a veloute sauce instead of a bechamel.   Of this pair of French “mother” sauces, bechamel is a classic white sauce and veloute exactly the same, only made with stock instead of milk or cream.  I liked the idea of a veloute since so much “dairy” is used for mac-n-cheese anyway.  But if you are a non-dairy “Dairy Queen,” then, by all means, substitute your favorite non-dairy milk for the vegetable base/bouillion and water.

So, this morning, having literally not cooked all week–we dined out for dinner a lot with a guest in town, meaning there was also plenty of leftovers for my school lunches–I eagerly woke up  and dove into what turned out to be my very simple and satisfying project.  Since the cheddar-like package of “shreds” I was sent was called “Mexican Flavor,” I decided to nudge my recipe slightly west of  the Missisippi River without making it overpoweringly Mexican.

The award-winning Go Veggie! Dairy Free Cream Cheese Alternative added just the right amount of body to my veloute, which is definitely a bit thinner than a bechamel, due ot the lack of butterfat.   Their cream cheese has a pleasantly mild flavor and creamy texture, though a little liquid had separated, which may have been due to shipping and really didn’t present a problem, regardless; I simply poured it off before using.

The Go Veggie! Dairy Free Mexican Flavor Shreds melted beautifully, though I could barely detect any Mexican spices in the mix of both Cheddar- and Jack-style shreds, which is probably just as well because that allows the cook to better control the spices and resulting flavor.  I chose a mere half teaspoon of ground cumin and a quarter teaspoon each of chili powder, dried oregano, and smoked paprika, along with onion, garlic and roasted poblano peppers.

For the topping, the Go Veggie! Dairy Free Grated Parmesan Style Cheese was tasty–nutty, pungent and appealingly dry–and browned just perfectly mixed with vegan butter and Panko bread crumbs.  I could have used crushed corn chips, but I was trying to merely suggest the Southwest, not hit anyone over the head with a sombrero!

Speaking of heads, I am head-over-heels for this one, and hope you are too!  My finished dish is just perfect to me: not a thick, “gloppy” cut-it-with-a-knife mac-n-cheese, but pasta noodles bathed in a rich, silky, deeply flavorful and golden sauce with plenty of cheesiness, though far less cheese than many recipes call for.

2 rounded teaspoons powdered vegetable base (or 2-3 bouillion cubes; not the extra large ones for 2 cups of liquid)

Preheat oven to 350 degrees.  Spray a casserole dish with nonstick cooking spray.   In a medium saucepan, melt butter over medium-high heat.  Add onion, and cook, stirring occasionally, until onoins are translucent, about 3 minutes.  Add garlic, and cook and stir for another minute.  Whisk in flour to make a roux, cooking and whisking for a couple of minutes to remove raw flour taste.  Slowly whisk in vegtable base and water.  (Note: you may substitute vegetable stock for vegetable base and water.)  And cook for about 7 or so minutes or until sauce is quite thick.  Add cream cheese alternative and whisk until melted, followed by shreds and all spices.  Check for seasoning, and adjust if necessary.  Stir in poblano peppers and then fold sauce into pasta and spoon lightly into prepared dish.  Sprinkle topping evenly over the surface, covering completely, and bake, uncovered, for 30 minutes. Let cool for about 15 minutes before serving to allow the sauce to reabsorb back into the pasta.

In a small saucepan, melt butter overmedium high.  Remove from heat and stir in crumbs and cheese until all ingredients are well combined. 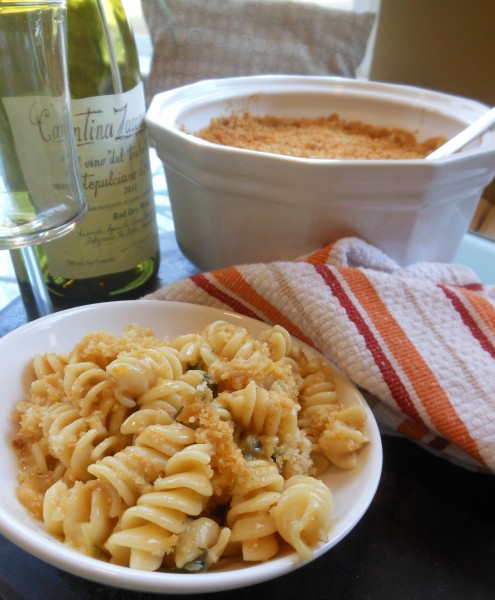 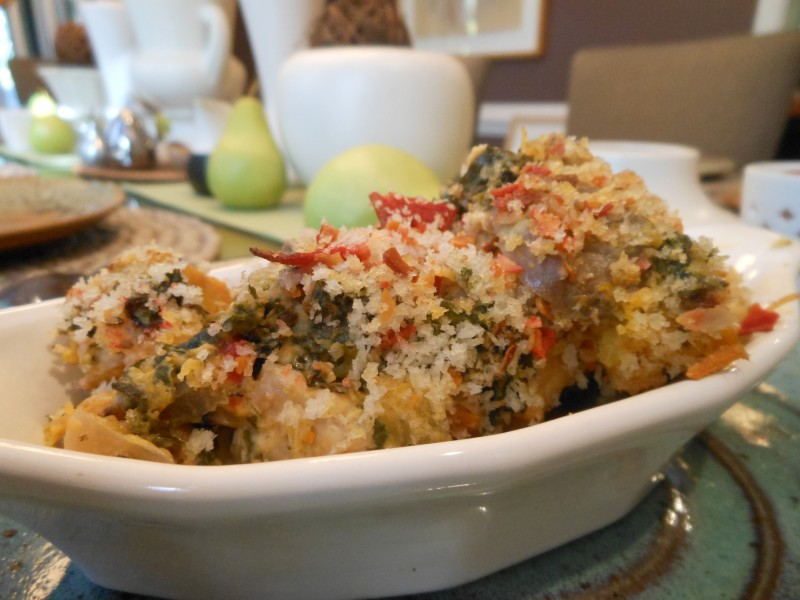 This creamy fall casserole is special enough for a Thanksgiving feast but easy enough for a weeknight meal.  The sweet potato chip topping is an updated nod to the vintage “church cookbook” casserole genre.

Though it is a balanced one-dish wonder–full of delicious, colorful and nutritious vegetables and tempeh–I will share a sweet potato side to round out this year’s three course Thanksgiving repast.  Be sure not to miss dessert which I served up first: Vegan Pumpkin Spice Chocolate Bundt Cake with Espresso Spice Ganache!

4 stalks celery, sliced lengthwise into quarters, and then finely diced

1 cup (I use Tofutti Better Than Sour Cream)

6 ounces sweet potato chips (*I use Terra brand Beets and Sweets), crushed (I roll a sturdy glass across them right in the bag)

Preheat oven to 350 degrees.  Oil a large casserole dish.  Heat 1 tablespoon olive oil in a large cast iron skillet over medium-high.  Add onion, celery, and a pinch of salt.  Saute, stirring frequently, for about 3 minutes or until beginning to soften.  Add tempeh and saute about 3 minutes more.  Add kale and cook, lowering heat if necessary and stirring fairly frequently, until tempeh is softened and partially wilted, about 3 to 5 minutes more.  Transfer to a large bowl.  Add pumpkin and mushrooms, and toss gently to combine.  In a small bowl, fold together sour cream, mayonnaise, flour, pimentos, multi-purpose seasoning, sage, and pepper. Spoon over vegetables and tempeh mixture, gently fold together until well-combined, check for seasoning and add more salt and pepper to taste.  Lightly mound into into casserole dish. Sprinkle evenly with crushed sweet potato chips, and bake, uncovered, for 30 minutes, covering if edges begin to brown too quickly.  Allow to cool at least 10-15 minutes before serving.

*Note: the first time I made this dish, I only had a half a bag of chips, so I combined 3 ounces chips with the same amount of panko bread crumbs, sprinkled the mixture over the casserole, and sprayed lightly with non-stick spray before baking.  It is delicious with either topping.