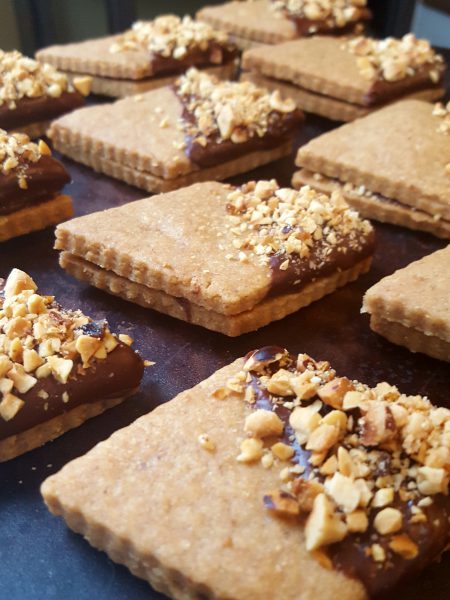 These stunning cookies are simple to make but will impress the most serious gourmand in both flavor and appearance.

I like to package them two to a cellophane bag, tied with raffia through a hole punched in my cute (if I do say so) business cards.

Preheat oven to 325°.  Line 2 baking sheets with parchment paper or Silpat. Spread 1/4 cup hazelnuts in a skillet or pie plate and toast for about 3 to 5 minutes or until lightly golden brown.

Bake the cookies for about 20 minutes, until the bottoms are lightly colored but the tops are still fairky light, rotating pans after 10 minutes. Transfer the baking sheets to wire racks and allow to cool.

In a medium saucepan over low heat, melt the chocolate with the remaining 6 tablespoons butter, whisking until smooth. Transfer the mixture to a medium bowl and let cool for 10 minutes. 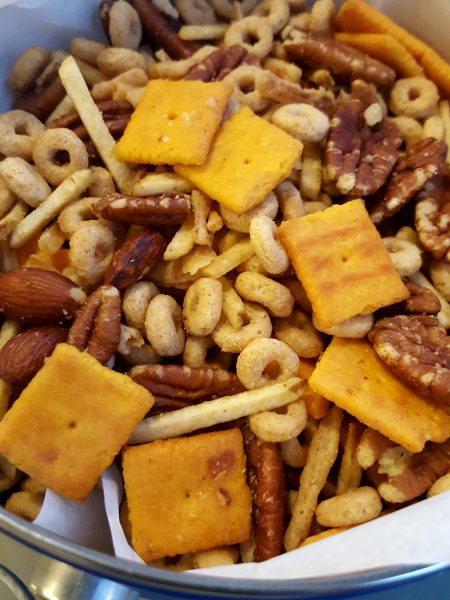 I guess you could call this “hunker down” food, as I seem to get a powerful urge to get my Chex on when temperatures drop and snow is in the forecast.  With snow predicted to start falling yesterday at around 4 p.m. and an early release from the high school where I teach art, I found myself in Whole Foods and Kroger buying “necessities.”

A few years back, I went on a Chex bender creating half a dozen or more delicious flavors, some with actual Chex cereal and some just inspired by that original Chex Mix recipe that my Texan mother always referred to as “Texas Trash.”  (You can find them all here–Tex-Mex, Indian, Thai, Italian, and more–just search “Chex mix.”)

That same craving was starting to play around the corners of my mind and belly again but, honestly, I have created so many of these recipes that there didn’t seem to be much uncharted territory left in the savory world that is.  Sweet Chex Mix just doesn’t do it for me, though I might create a Moroccan flavored one with dried apricots.  Stay tuned.

This cold weather–okay, pretty much any weather–ignites my appetite for Tater Tots: that crispy-on-the-outside-soft-on-the-inside-ever-so-slightly-greasy goodness.  And, recently, on the Whole Foods “hot bar,” they were serving “Loaded Tater Tots,” which, of course, I couldn’t eat, as they were piled with bacon, cheddar cheese, and sour cream, along with fresh, bright green onions. But I could certainly fantasize; and, in the process, I realized I could easily translate all of those flavors to a Chex-less Mix.

The tots themselves became Potato Sticks (sold on most snack aisles) and fried onions in a can (you know, the kind used for green bean casserole topping) to capture the crispy fried goodness of the Tot exterior while also imparting the onion flavor.  The bacon became smoked almonds–and I threw in lots of pecan halves just because I love them–and the cheese Earth Balance Cheddar Flavored Squares.  (Here in Virginia, I find them at Whole Foods, where the cashier and I had a conversation about what a dead-ringer they are for Cheez-Its.)   To lend the tanginess of sour cream, I actually whisked some vegan sour cream into the melted vegan butter base.  It does not make the mix soggy–far from it.   And, finally, I included Cheerios because they are neutral in flavor, a cute shape, deliciously crunchy, extend the volume of the mix, and are one of my favorite ingredients in the original Chex Mix.

So, there you have it.  This ain’t no vegan health food, so don’t even start, but for the occasional splurge or gift from your kitchen?  Oh yea!  However, having second thoughts about being snowed in with all of this high-calorie goodness, I decided to gift it to neighbors.  After I walked the dogs late in the afternoon as the beautiful snow began to come down, I went for my own walk.  Before I set out into the deepening snow, I tucked a late gift for one of our dog walkers and a huge canister of mix into one plastic bag and a casserole dish that I needed to return to someone else filled with the rest of the mix into its own snow-proof bag.

I love bundling up and experiencing the world when it is hushed and still, wrapped ’round with a frozen white cloak.  It was even more satisfying for my muffled footsteps to be taking me on a solo mission that would bring a little tasty joy into the cozy homes of friends at opposite ends of our neighborhood.

Preheat oven to 250 degrees. Place vegan butter in a large roasting pan and place pan in oven for a few minutes until butter is melted. Remove pan from oven and whisk in vegan sour cream, Liquid Aminos, and garlic powder. Then, in the order listed, gently stir in the remaining ingredients. Place the pan back in the oven and bake mixture for 45 minutes, gently stirring every 15. Let cool completely and then package in airtight containers. 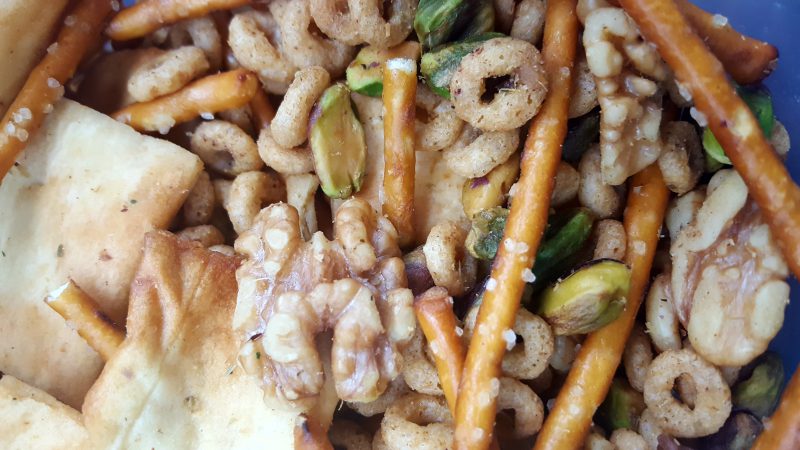 It’s official. I am obsessed. This is my 6th or 7th version of Chex Mix this year, each one–if I do say so–a flavor sensation.

This iteration was inspired by Juan Gelpi’s vegan gyros. I could not get those flavors out of my mind after seeing his Instagram photo, even during Saturday morning yoga. I was mindful alright. Mindful that I was stopping at Whole Foods on the way home and procuring ingredients. (That is where I find vegan tapenades.)

Admittedly, this Chex Mix contains no Chex. That wasn’t my intention; it just didn’t seem to need more crunch. Or more anything. It is lemony, garlicky, nutty, Greek perfection. Hope you agree.

I made this for one of my late husband’s paralegals’ birthday with the surplus going to others at the firm. I had to get it out of the house quickly…before I consumed it all.

Zest of one large lemon

Preheat oven to 250 degrees. Place butter in large roasting pan, slide into oven, and allow µbutter to melt. Remove and whisk in lemon zest, tapenade, bruschetta, and all spices.  Stir in remaining ingredients, one at a time until evenly coated. Roast mixture for an hour, stirring every 15 minutes. Remove from oven, let cool, and package in airtight containers.

From a breakfast of Red Velvet Pancakes to Red Velvet Brownies for kids or a little savory “Heart Tart” for lunch or dinner–plus lots of sweets, including mints and truffles that are perfect little heart-felt gifts from your kitchen–I think you’ll find something here to love.

Vegan Chocolate Truffles–created when I was disappointed with other recipes I found online.

Vegan Red Velvet Pancakes (THE BEST!)–I created these when I was dissatisfied with all of the recipes I could find online.

Vegan Red Velvet Brownies–VERy popular on One Green Planet and, again, created when I couldn’t find what I wanted after searching online.

Vegan Peppermint and Chocolate Patties–peppermint and chocolate, a marriage made in heaaven, so pretty layered in a ribbon-tied box. 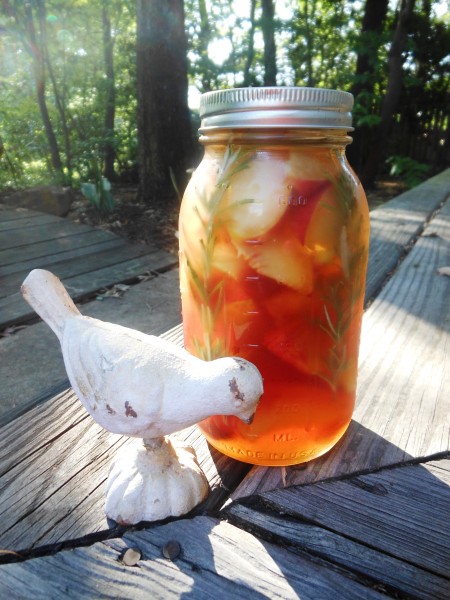 I think that canned fruits and vegetables are so beautiful, sparkling like jewels under glass.  But, sterilizing jars is  a deal-breaker for me.

So, when I saw this recipe from Robby Melvin in Southern Living, I was all about it.  These quick pickles are “put up” in jars, but no sterilizing is required, as they stay refrigerated.

His paired strawberries and rosemary, honedew and thyme, and peaches and mint, but pair up any fruit or berry and woody herb you choose.

I altered the recipe just a little only because I  didn’t have white balsamic vinegar on hand, but did have white balsamic vinegar reduction and white vinegar.  I also upped the vinegar in the vinegar-water ration–I love bold flavors–and I didn’t have mint in my herb garden, so I used rosemary with the peaches I purchased at the farmer’s market on the way home from yoga yesterday morning.

I doubled my recipe to make 2 jars and took them as gifts to the inaugrual dinner of the Starlight Supper Club last night.  I’ve always wanted to be in a “supper club,” so two friends and our husbands finally started one.  Becky Bump and Reese Lusk set the bar high  with a deliciously inspired menu in a breathtaking setting among treasured friends. More on our wining and dining throughout the year.

In a 2-quart saucepan, bring vinegar, sugar, water, white balsamic vinegar reduction, and salt to a boil.  Remove from heat and completely cool (about 1 hour).   After about 45 minutes, slice peaches into eighths and place in a 1 quart jar along with rosemary on the sides so that it shows nicely.  Poor cooled pickle brine over the fruit, seal tightly with a lid and refrigerate for 1 hour, at least, but best after 8 to 12.  Keeps about 1 week in the refrigerator.