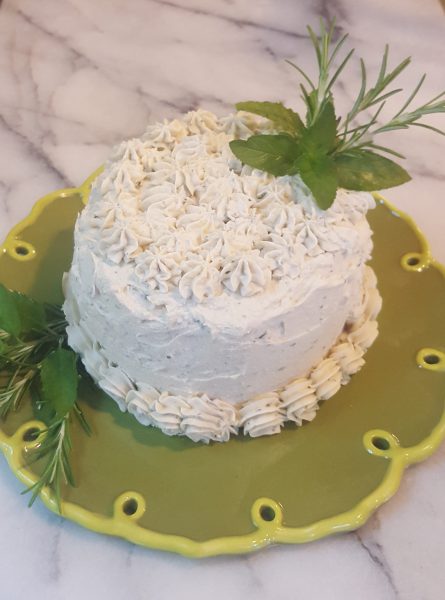 This beautiful “cake” is a cinch to make though it impresses in both flavor and appearance.  It looks so pretty on a buffet…maybe even for a wedding or bridal shower?

Admittedly, I took a cake decorating class in high school and have done some decorating over the years, but wielding a pastry bag, especially to make simple borders, stars, and swirls, is quickly and easily mastered.  A YouTube video will do the trick.  However, if you prefer, you can simply frost the cake, garnish with fresh herbs, and your results will be lovely.  I just like the finished edge that piped frosting gives to a cake. 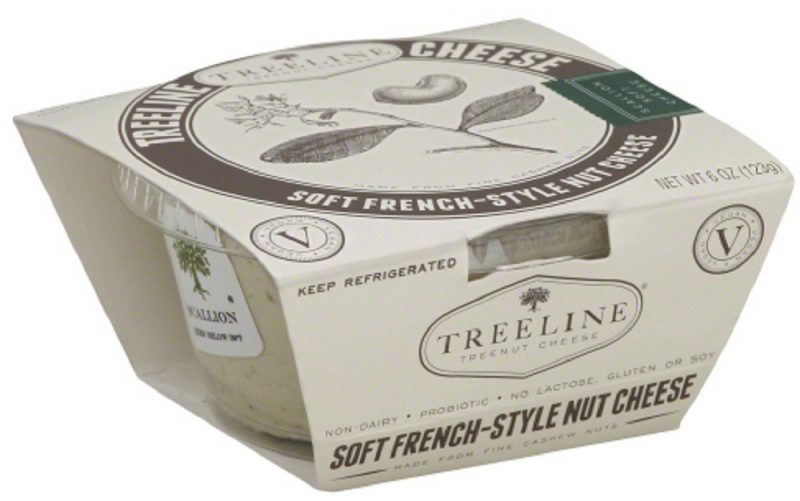 This  “recipe” is not much of a recipe.  You simply stack the vegan bologna, filling between the layers and frosting the sides and top with a mixture of vegan cream cheese and Treeline Soft French-style nut cheese, which I purchase at Whole Foods.  But you could use all cream cheese.  After tucking a few sprigs of fresh herbs here and there, you are finished.  Be sure to slice it with a serrated knife, as 18 layers or so is fairly dense, but oh-so-delicious.

Bob, my meatatrian partner who prefers meat with meat sauce and a side of meat, confessed that he prefers vegan bologna to “real” bologna!  The vegan variety has a much smokier flavor. 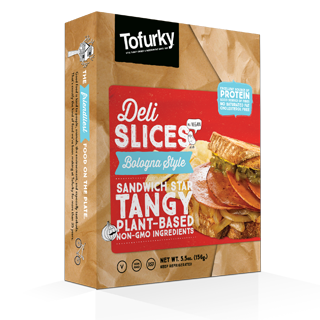 Sea salt and freshly ground pepper to taste if desired

Sprigs of fresh herbs such as basil, mint, sage, and rosemary

With an electric mixer–stand or hand-held–cream together all ingredients, except bologna, until fluffy.  Line a serving plate with 4 strips of foil or waxed paper to protect plate.  Lay 1 slice of bologna on top, spread to edges with small amount of filling, and repeat with all 18 layers, making the last layer, which will be the top, nice and thick.  Frost sides, pipe on more frosting as decoration, if desired, and garnish with fresh herbs.  Refrigerate until serving time. Store any leftovers in the refrigerator in an airtight container. 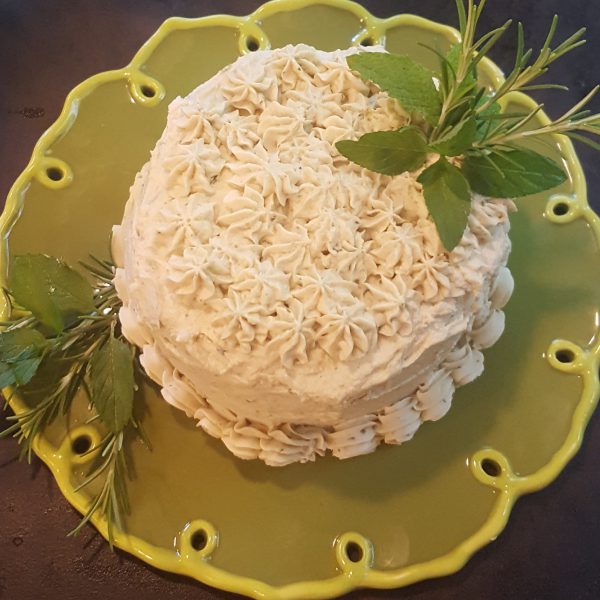 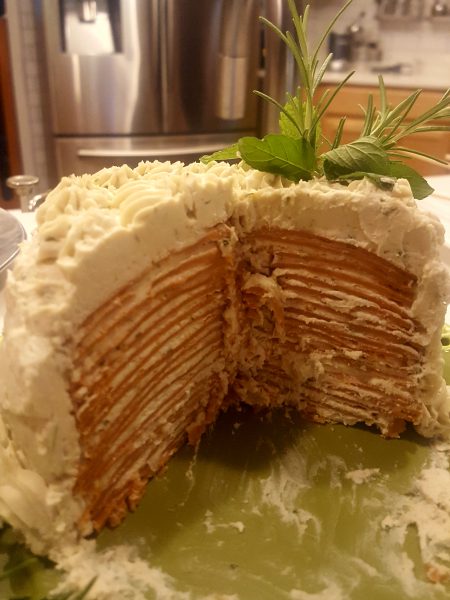 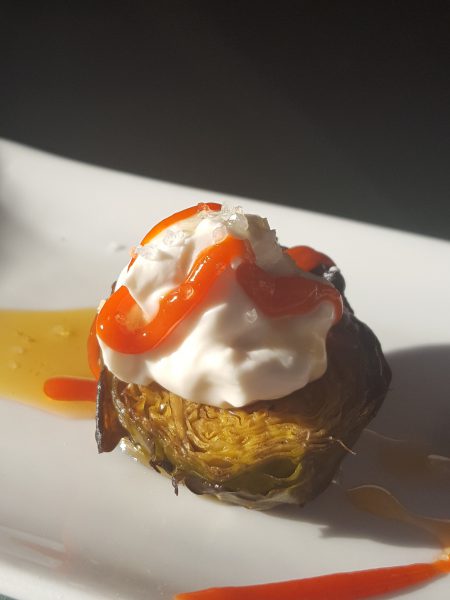 Ordinarily, I wouldn’t enjoy Brussels sprouts for breakfast. However, southeast Virginia, where I live, just experienced “Snowmageddon,” aka The Blizzard of 2018, and the light is absolutely breathtaking.

So I knew I wanted to do a photoshoot this morning to take advantage of the glorious glistening out the window.  And I certainly wasn’t going to allow these beauties to go to waste.

If you are in need of a quick, drop-dead gorgeous, and delicious appetizer–or breakfast (just kidding)–look no further. 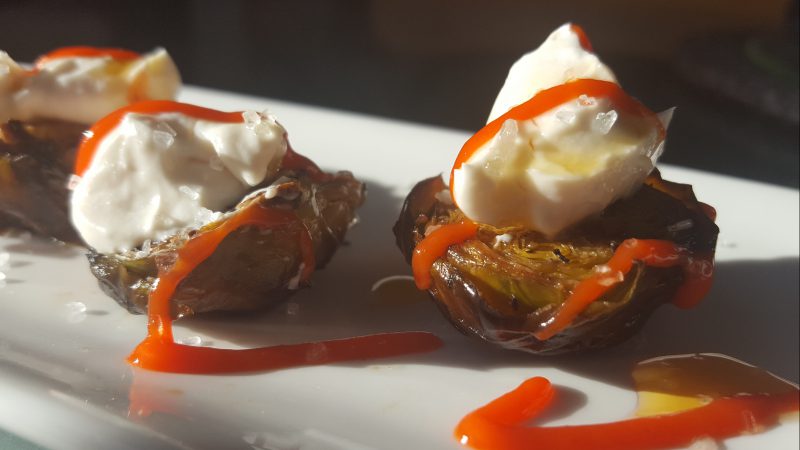 Simply top crispy roasted Brussels sprouts halves with a dollop of softened vegan cream cheese or nut cheese, homemade or prepared like Treeline brand, a drizzle of maple syrup from a spoon going in one direction, and a drizzle of sriracha straight from the bottle going in the other direction–almost like handwriting–and finish with a sprinkling of coarse sea salt. (Note: I am impatient and like my Brussels sprouts practically charred, so I roast them at 500 degrees with just a hint of nonstick spray or olive oil and coarse sea salt, stir them a couple of times, and watch them carefully.)

Voila! You will impress your guests and satisfy both their eyes and their appetites. 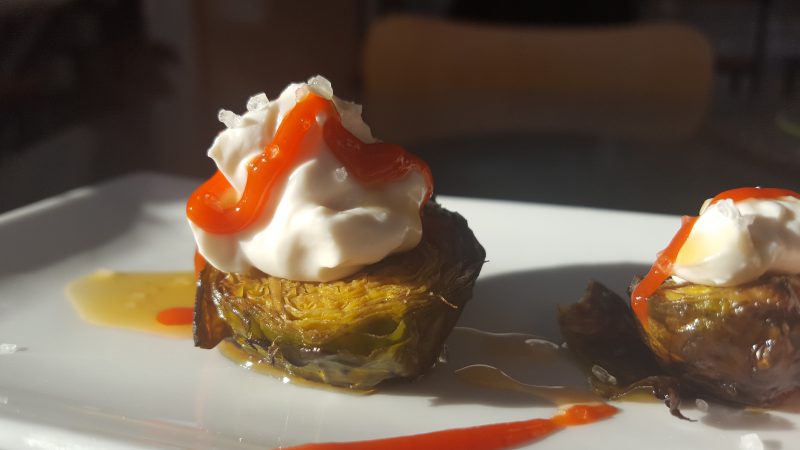 Today seemed like the perfect day to repost  a recipe I recently developed for Tofutti even if Super Bowl Sunday finds you sitting on your sofa rather than your tailgate: Vegan Tailgate Taters–Game On! 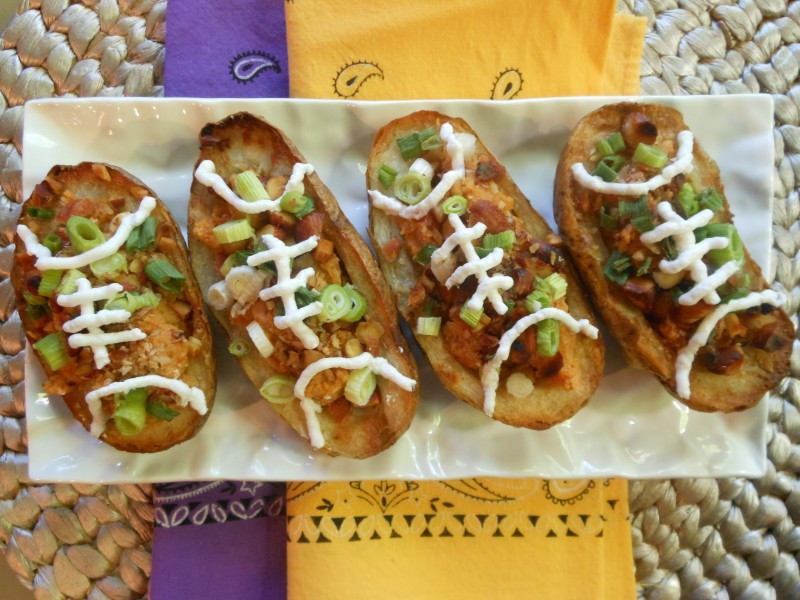 These delicious potato skins will look like irresistible little footballs on your tailgate spread.  I so enjoyed taking the “pig” out of “pigskin” for this vegan version of JaMarcus Russell’s “Famous Tailgat Taters,” commissioned by the good folks at Tofutti Brands, Inc! 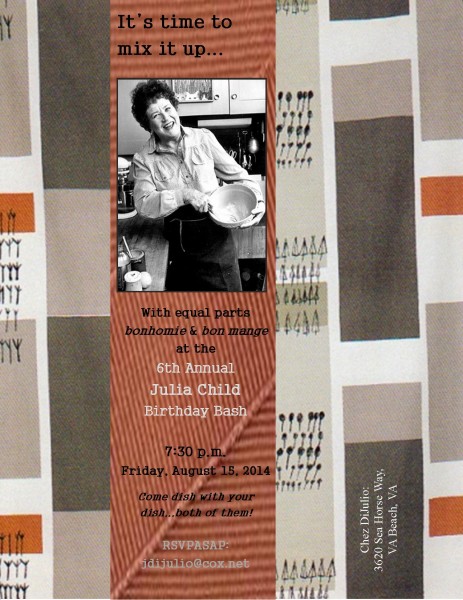 For the last five years–since the move Julie and Julia came out–my husband, Joe, and I have hosted a birthday party for Julia Child on or near the weekend of her August 15 birthday.  And I invite you to do the same!

Having just seen the movie with my parents and sister five years ago, and looking for an excuse to gather some friends together for a late summer party, I hit on a birthday party for this larger than life icon and role model for home cooks who wanted to elevate their culinary repertoire a la Francaise (beginning in 1961 with the publication of Mastering the Art of French Cooking.)

This summer soiree has turned out to be our friends’ favorite gathering of the warm weather season, so the tradition has continued for this, our sixth summer.  And it is a no-brainer for me as the hostess because it is fortune du pot or potluck.

However, some rules do apply:  while I do not insist that contributions be vegan or vegetarian (I am the only vegan in the crowd and Reese Lusk the only strict vegetarian), they usually are, e.g. Beet Bourguignon.  But they must be prepared according to or inspired by one of Julia’s recipes or, at least, something French.  And everyone is asked to bring a bottle of a favorite wine, prerferably French, of course.

Our generous comrades go way beyond with gifts and flowers, all of it unnecessary but much appreciated.  And the presentation!  All of these folks love good simple design as much as they love good simple (or sometimes not-so-simple) food and good company, so it is like a tantalizing parade as our guests start arriving.

We only confer minimally ahead of time about what eachof us plans to prepare, but the spread is alway spsrawling and spectacular in both taste and appearance, with every dish complementing every other beautifully.  I sometimes prepare a birthday cake, though not always, as its not like we need to amp it up in the celebration department.  Wine, conversation and good cheer flow freely for several hours around our dining table that comfortably seats 10.

Iget a kick out of designing a digital invitation like the one shown here in Microsoft Publisher after conferring about a date via email (sometimes we’ve had to hold the party the week before due to scheduling conflicts).  After that, there’s nothing more to do except anticipate a beautiful summer evening that practically creates itself.